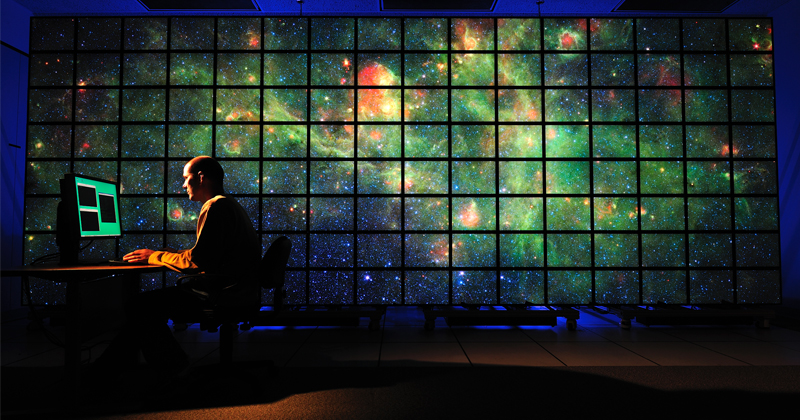 A new search led by Montana State University has revealed more than a dozen massive black holes in dwarf galaxies that were previously considered too small to host them, and surprised scientists with their location within the galaxies.

The study, headed by MSU astrophysicist Amy Reines, searched 111 dwarf galaxies within a billion light years of Earth using the National Science Foundation’s Karl G. Jansky Very Large Array at the National Radio Astronomy Observatory, two hours outside Albuquerque in the plains of New Mexico. Reines identified 13 galaxies that “almost certainly” host massive black holes and found something unexpected: The majority of the black holes were not in the location she anticipated.

“All of the black holes I had found before were in the centers of galaxies,” said Reines, an assistant professor in the Department of Physics in the College of Letters and Science and a researcher in MSU’s eXtreme Gravity Institute. “These were roaming around the outskirts. I was blown away when I saw this.”

The eXtreme Gravity Institute brings together physicists and astronomers to study phenomena where the forces of gravity are so strong they blur the separation between space and time, such as the big bang, neutron stars and black holes.

There are two main types of black holes, incredibly dense areas of space with gravitational pulls strong enough to capture light. Smaller, stellar black holes form as large stars die and are roughly 10 times the mass of our sun, according to Reines. The other type, known as supermassive or massive black holes, tend to be found at the center of galaxies and can have masses millions or even billions that of our sun. Scientists don’t know how they are created.

The Milky Way, a spiral galaxy consisting of somewhere between 100 and 400 billion stars, has a massive black hole at its center, Sagittarius A*. Dwarf galaxies can be of any shape, but are much smaller than the Milky Way, with up to a few billion stars.

Reines’ results confirm predictions from recent computer simulations by Jillian Bellovary, an assistant professor at Queensborough Community College in New York and Research Associate at the American Museum of Natural History, which postulated that black holes may often be off-center in dwarf galaxies due to the way galaxies interact as they move through space. The findings may change how scientists look for black holes in dwarf galaxies in the future.

“We need to expand searches to target the whole galaxy, not just the nuclei where we previously expected black holes to be,” Reines said.

Reines’ paper, “A New Sample of (Wandering) Massive Black Holes in Dwarf Galaxies from High Resolution Radio Observations,” was published Jan. 3 in The Astrophysical Journal, and Reines reported the findings at the American Astronomical Society meeting in Honolulu, Hawaii, on Jan. 5.

Reines has been searching the skies for black holes for a decade. As a graduate student at the University of Virginia, she focused on star formation in dwarf galaxies, but in her research she found something else that captured her interest: a massive black hole “in a little dwarf galaxy where it wasn’t supposed to be.”

“Once I started looking for these things on purpose, I started finding a whole bunch,” Reines said.

Her next search of the universe shifted to visual data rather than radio signals. It uncovered over 100 possible black holes in the first systematic search of a parent sample of more than 40,000 dwarf galaxies. For her latest search, described in the paper released this month, Reines wanted to go back and look for radio signatures in that sample, which she said would allow her to find massive black holes in star-forming dwarf galaxies. Only one galaxy was identified using both methods.

“There are lots of opportunities to make new discoveries because studying black holes in dwarf galaxies is a new field,” she said. “People are definitely captivated by black holes. They’re mysterious and fascinating objects.”

Reines’ discoveries have poured new energy into the search for black holes in dwarf galaxies, opening up new areas of astrophysics as she and other scientists attempt to discover how these massive black holes form.

“When new discoveries break our current understanding of the way things work, we find even more questions than we had before,” said Yves Idzerda, head of the Department of Physics at MSU.

Armed with a microphone, Alex Jones took to the streets atop the Infowars battle tank in Richmond, Virginia, to rally patriots with a powerful message.