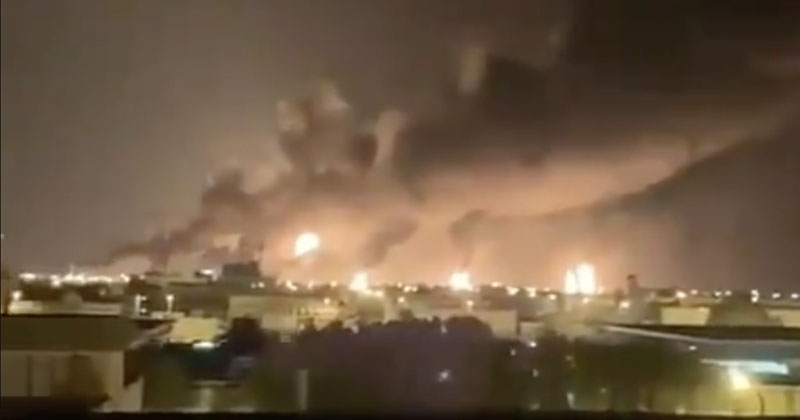 What appears to be the most devastating Yemen Houthi rebel attack on Saudi Arabia to date, took place overnight on the world’s largest oil processing facility as stunning videos emerged of massive explosions rocking the major Aramco Buqyaq facility.

Fires burned into the morning daylight hours, with explosions also reported at the Khurais oil field, in what the Houthis said was a successful attack involving ten drones. “These attacks are our right, and we warn the Saudis that our targets will keep expanding,” a rebel military spokesman said on Houthi-operated Al Masirah TV.

Saudi authorities — initially slow or reluctant to identify the cause of the major blaze — on Saturday issued a confirmation via the Saudi Press Agency: “At 4.00am (01:00 GMT) the industrial security teams of Aramco started dealing with fires at two of its facilities in Abqaiq and Khurais as a result of… drones,” an interior ministry statement said, which further claimed the fires were “under control”.

#Buqayq city view as #Aramco facilities burn. Very likely to be an attack of some sort as gunshots are also heard. #SaudiArabia #Saudi #arabtwitter pic.twitter.com/wkPB2xBKyi

However, the Saudis have stopped short of acknowledging the Houthis were behind the attack, which Riyadh is also likely to blame on Iran, which has lately promised that if it can’t export its oil then “no one will”.

It remains unclear according to early statements whether there were injuries or casualties in the twin oil facility attacks.

In some of the video captured by onlookers outside the Buqayq facility, gunfire in or around the complex was apparent.

A third video filmed from around the corner from the first two.

The impact on global oil markets – closed for the weekend – could be significant given the Khurais field produces about 1% of all the world’s oil (estimated at over 1M bpd and reserves of over 20BN bpd) and more importantly Abqaiq, which based on the stunning local footage bore the brunt of the drone attacks, remains the most crucial of the kingdom’s processing plants.

Located 37 miles southwest of Aramco’s Dhahran headquarters, it controls all the flows from fields like the giant Ghawar field to coastal export terminals like Ras Tanura. Saudi Aramco describes the Buqyaq facility as “the largest crude oil stabilization plant in the world.”

The world's largest oil processing facility has been hit in a drone attack.

Yemen's Houthi rebels have said they were behind the strikes on Saudi Arabia's Abqaiq plant. Read the full story here: https://t.co/PIGqR4cB2o pic.twitter.com/0Zor9f3Eye

Meanwhile, the United States was quick to “strongly condemn” the attack amid already soaring tensions in the gulf after a summer of “tanker wars” and Iranian threats of walking away altogether from the 2015 nuclear deal (JCPOA).

The U.S. envoy to Saudi Arabia issued a statement saying, “The U.S. strongly condemns today’s drone attacks against oil facilities in Abqaiq and Khurais. These attacks against critical infrastructure endanger civilians, are unacceptable, and sooner or later will result in innocent lives being lost.”

According to Reuters reports the drone attacks will impact up to 5 million bpd of oil production, which suggests that the price of oil – already severely depressed by the recent news that John Bolton is out, making de-escalation with Iran far more likely – is set to soar when trading reopens late on Sunday, just what the upcoming Aramco IPO desperately needs, which in turn has prompted some to wonder if the “Yemen” attack on Saudi Arabia wasn’t in fact orchestrated by Saudi interests. 18 years after Sept 11, this shouldn’t sound all that outlandish…

9/11 victims compensation bill, the alleged death of Osama bin Laden’s son, reports that the “mastermind” of 9/11 attack will talk to avoid the death penalty. But the media keeps quiet about NY Fire Commissioners joining Lawyers Committee for 9/11 Inquiry to demand a real grand jury investigation of “overwhelming evidence of pre-planted explosives” bringing down the 3 building, not 2 planes.