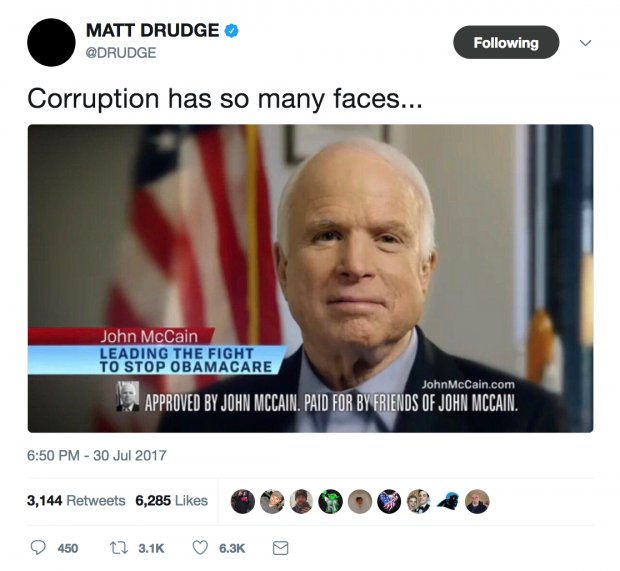 Matt Drudge, media titan and creator of the Drudge Report, declared war on RINO John McCain in a brief but incisive tweet this weekend after the Arizona senator betrayed his campaign promise to repeal the Affordable Care Act.

“Corruption has so many faces…” wrote Drudge as a caption above an image of McCain in which he touts himself as “Leading the fight to stop Obamacare.”

The picture is a screenshot from a promotional advertisement from his 2016 re-election campaign which was partially predicated upon a pledge to his constituents to help kill Obamacare – a promise he broke last week by casting the deciding vote to block the ‘skinny repeal’ alongside two other RINOs and fully-unified Democrats.

McCain is fully aware of the damage the law is doing to Arizonans, telling Politico last year, “I think it’s a very strong issue. Eight of the counties in my state will now only have one health insurer. They’re staring at 65 percent increases in their premiums. They’re very upset.”

Headed to the floor to speak about the new health care regulations related to Obamacare – we must repeal and replace.

In a debate against his Democrat opponent during last year’s race, McCain also admitted his understanding of how unpopular Obamacare is with Americans across the country, saying, “According to a Gallup poll, the majority of Americans do not approve of Obamacare, and 29% of Americans, according to Gallup, say that they have been harmed by Obamacare.”

According to a report from the Washington Post, McCain was lobbied by ex-Vice President Joe Biden to vote against the Obamacare repeal, and he was warmly praised by an ’emotional’ Senator Chuck Schumer (D-New York) after the fact.

Chuck Schumer gets choked up talking about John McCain.#CNN pic.twitter.com/DvKYRxuINf

“All of us were so inspired by the speech, and the life, from the Senator from Arizona, and he asked us to go back to regular order, to bring back the Senate that some of us who were here a while remember,” said Schumer. “Maybe this can be a moment where we start doing that.”

President Trump blasted McCain and his fellow co-conspirators, Lisa Murkowski (R-Alaska) and Susan Collins (R-Maine), in the wake of the vote, tweeting, “3 Republicans and 48 Democrats let the American people down. As I said from the beginning, let ObamaCare implode, then deal. Watch!”

3 Republicans and 48 Democrats let the American people down. As I said from the beginning, let ObamaCare implode, then deal. Watch!

While the President views the worst case scenario as Obamacare bottoming out before the introduction of a new plan, he is still optimistic that it can be repealed and replaced sooner in order to minimize the suffering it is causing many Americans.

“Don’t give up Republican Senators, the World is watching: Repeal & Replace…and go to 51 votes (nuke option), get Cross State Lines & more,” he tweeted, adding that Congress – who exempted themselves from the law when they passed it – and insurance companies should share in the pain. “If ObamaCare is hurting people, & it is, why shouldn’t it hurt the insurance companies & why should Congress not be paying what public pays?”

If ObamaCare is hurting people, & it is, why shouldn't it hurt the insurance companies & why should Congress not be paying what public pays?