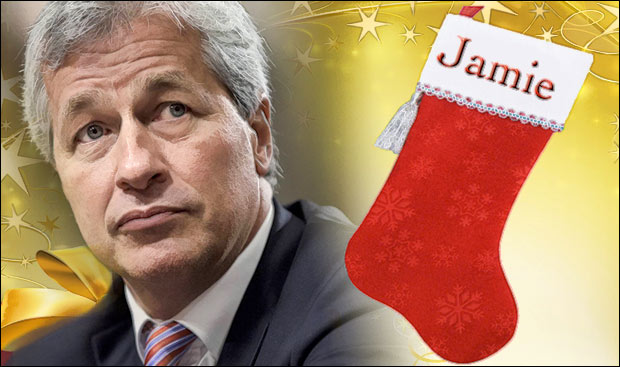 If it were up to Max, Jamie’s stocking wouldn’t contain coal. It’d contain a dose of syphilis.

Jamie Dimon is the bankster boss at JP Morgan Chase, one of the Big Four of the financial mafia. He’s a former director of the Board of Directors of the New York Federal Reserve.

One of the sparkling jewels of the CIA’s Mockingbird corporate media, Time magazine, lovingly put Dimon on its list of the world’s most influential people, not once but four times. Banksterism has its privileges, after all.

“We’ve seen over the past ten years or so an innovation in central banking that came in under Bernanke,” Max told RT on Sunday, two days out from the centennial of the private bankster cartel, the Federal Reserve.

“It used to be when the Fed printed a lot of money, you’d see prices, wages, consumer items and assets go up in value. But under Bernanke there’s been an innovation central banking where they print money and they put it directly into the pockets a bankers, so wages don’t go up. So it’s a beautiful new world where the central bank simply hand over billions of dollars to their cronies in the banking system and wages never go up. So, this is the new world order.”

Why give Jamie syphilis in his Christmas stuffer? “So he can experience first-hand what everyone around the world experiences with his day-to-day banking terrorism,” Max explains.

Asked about bankster Christmas parties, Max suggested bringing in the cast of the Sopranos to “re-enact some of the famous scenes where several people get whacked,” which Keiser thinks would be a “fantastic way to extend the brand at JP Morgan.”

Keiser has a few other seasonal suggestions for the bankster and financial elite. See the video: