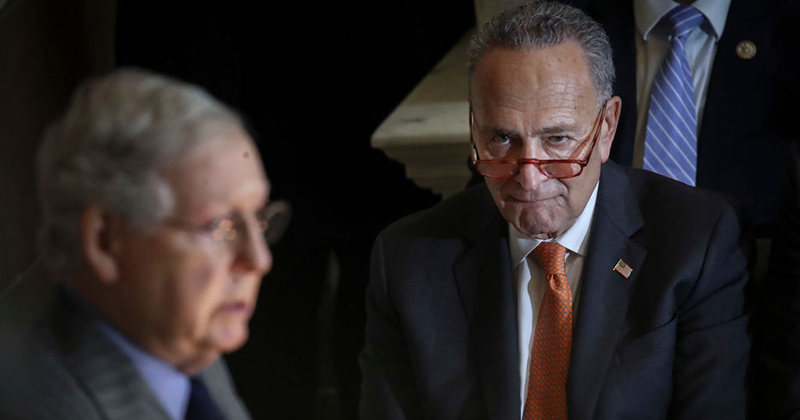 House impeachment managers will have just two days to prosecute their case against President Donald Trump according to a resolution circulated by Senate Majority Leader Mitch McConnell, in a move meant to accelerates the timetable for a trial Republicans intend to end in a speedy acquittal.

President Trump’s team will also have two days to present their arguments and then senators will have a chance to ask questions and consider subpoenas of witnesses.

Here’s the @senatemajldr resolution outlining how the impeachment trial will proceed: pic.twitter.com/apEkwk2D81

According to The Hill, both sides will have 24 hours to make their first round of arguments, the same amount of time House impeachment managers and Bill Clinton’s lawyers received in 1999, but it limits them to just two days each, instead of the three allowed in Bill Clinton’s impeachment trial more than 20 years ago.

A Senate GOP leadership aide noted that prosecutors in the Clinton trial didn’t use all of their allotted time and finished their opening arguments within three days.

Alex Jones bullhorns while surrounded by a sea of pro-2nd Amendment patriots in Richmond, Virginia.

The resolution does not require additional witnesses to be subpoenaed, much to the anger of Democrats, and does not allow House prosecutors to admit evidence into the Senate trial record until after the opening arguments are heard.

The rules would also allow the president’s team to seek a quick dismissal of the charges, though many Republican senators have said they should at least hear the case.

In response, the top Senate Democrat, Charles Schumer quickly pushed back and vowed to force votes on amendments.

“Sen. McConnell’s resolution is nothing short of a national disgrace,” Schumer said in a statement Monday afternoon, further accusing McConnell of casting aside public statements that he would use the same rules as under the Clinton trial, adding that the majority leader is clearly “hell-bent on making it much more difficult to get witnesses and documents and intent on rushing the trial through.”

After reading his resolution, it’s clear Sen. McConnell is hell-bent on making it much more difficult to get witnesses & documents and intent on rushing the trial through

On something as important as impeachment—Sen. McConnell’s resolution is nothing short of a national disgrace pic.twitter.com/hyDVTYqdC5

Schumer also said in a statement Monday evening that he will offer amendments to alter “the many flaws” in a “deeply unfair proposal,” as well as to subpoena further witnesses and documents.

The resolution also includes language favored by Sen. Susan Collins (R-Maine) and other GOP moderates requiring a debate and vote on subpoenaing new witnesses and documents.

Republican Senator Lamar Alexander, who worked with McConnell and Collins to modify the resolution, said it “guarantees a vote on whether we need additional evidence at the appropriate time.”

Schumer argues that forcing House managers to cram their opening arguments into a two-day window will force them to present on the Senate floor well into the evening and possibly past midnight.

“McConnell’s resolution stipulates that key facts be delivered in the wee hours of the night simply because he doesn’t want the American people to hear them,” Schumer said.

According to the resolution, House managers will be allowed to begin their arguments 1 p.m. Wednesday.

In response, a Senate GOP leadership aide told the Hill that in 1999, the House prosecutors and the president’s defense team each used fewer than 12 hours over a three-day period. “This resolution provides the same time but more structure for the arguments,” the aide said. The resolution also provides 16 hours for senators to ask questions.

In another departure from the 1999 organizing resolution, McConnell’s measure does not allow evidence from the House impeachment inquiry to be entered into the Senate trial record until after the question of additional witnesses and documents receives consideration. McConnell reportedly did this in response to Trump’s lawyers not having the opportunity to cross-examine witnesses at the House hearings.

“The White House was denied due process throughout the 12 weeks of partisan House proceedings,” the source said.

Additionally, according to McConnell’s resolution if the Senate votes at the end of phase one against subpoenaing witnesses, then it will not be possible to consider additional motions on specific witnesses. Democrats have said they want to subpoena former national security adviser John Bolton, acting White House chief of staff Mick Mulvaney, senior White House adviser Robert Blair and senior Office of Management Budget official Michael Duffey.

The Senate will vote on the resolution Tuesday.

Schumer called on moderate Republican colleagues to reconsider McConnell’s aggressive timeline: “Any senator that votes for the McConnell resolution will be voting to hide information and evidence,” he said in his statement.

“I will be offering amendments to address the many flaws in this deeply unfair proposal and to subpoena the witnesses and documents we have requested,” he added.

The White House immediately backed McConnell’s rules, but didn’t indicate whether it would press a quick vote on a motion to dismiss.

“Protecting the president’s rights to offer pretrial motions was critical for us to support the package, and we’re very gratified with the resolution,” said Eric Ueland, the White House’s liaison to Congress. “I’m not going to talk about trial strategy publicly.”

“It makes sense” to file a motion to dismiss because in every criminal case where there is no wrongdoing, you should try and get a dismissal, Alan Dershowitz, a member of Trump’s defense team, said in an interview Monday evening.

Earlier on Monday, the White House and impeachment managers from the House of Representatives released a pair of filings where both sides argued that constitutional separation of powers is at stake in the trial.

The president’s 171-page filing contends that the House failed to prove that the president explicitly linked aid for Ukraine to an investigation Trump sought into political rival and former Vice President Joe Biden. And the president’s lawyers argued that the Senate should swiftly reject the impeachment articles.