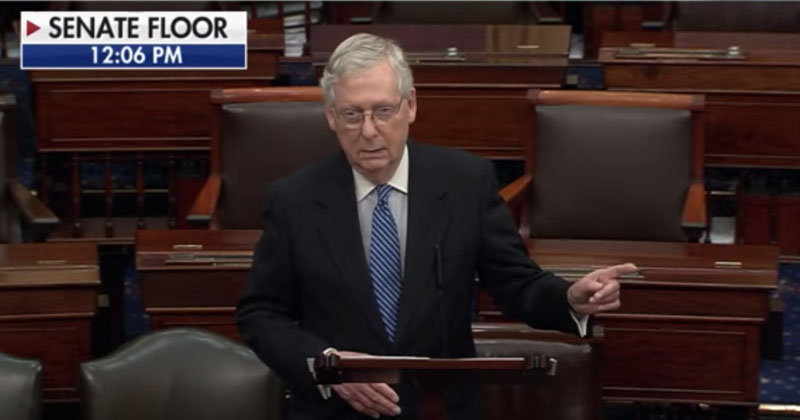 The cloture vote of the third installment of the coronavirus economic relief package failed Sunday at 47-47, as 60 votes were needed but 5 Republican senators missed the vote due to self-quarantine.

“Are you kidding me?” McConnell (R-Ky.) fumed on the Senate floor. “Why are Democrats filibustering the bipartisan bill they helped write? Appropriate question to ask this morning as the country waits on us.”

“Democrats won’t let us fund hospitals or save small businesses unless they get to dust off the Green New Deal,” McConnell said.

“I’d like to see Senate Democrats tell New York City doctors and nurses, who are literally overrun as we speak, that they’re filibustering hospital funding and more masks because they want to argue with the airlines over their carbon footprint!” he continued.

“So these are just few of the completely non-germane wishlist items that they’re rallying behind, preventing us from getting this emergency relief to the American people right now,” McConnell added.

Democrats even have a provision about “corporate board diversity.”

You can tell Democrats have a laser focus on helping Americans and the economy. pic.twitter.com/o9xwMgZ8PP

On Sunday, McConnell said he switched his vote to “no” which allows a second vote.

The American people expect us to act. If we fail, it will be because Senate Democrats are continuing to dither while the country expects bold, bipartisan action. pic.twitter.com/23pFHoDtCl

“I changed my vote which gives me the opportunity to move to reconsider at a later time. That’s all I can do in the face of obstruction. I can understand obstruction when you’re trying to achieve something. This obstruction achieves nothing,” McConnell said.

“We’ll have this cloture vote again at some point of my choosing and hopefully some adults will show up on the other side of the room and understand the gravity of the situation.”

The vote was expected to pass until House Speaker Nancy Pelosi intervened Sunday, announcing the House Democrats would put forth their own version of an economic relief package.

“It’s on the Senate side now because that’s their deadline for a vote, but we’ll be introducing our own bill and hopefully it’ll be compatible with what they discussed on the Senate,” Pelosi told reporters.

The Senate held another cloture vote again Monday, but the bill again failed to pass with a 49-46 vote.

Attention citizens of all states of the American Republic. The globalists are on the verge of assuming total control.