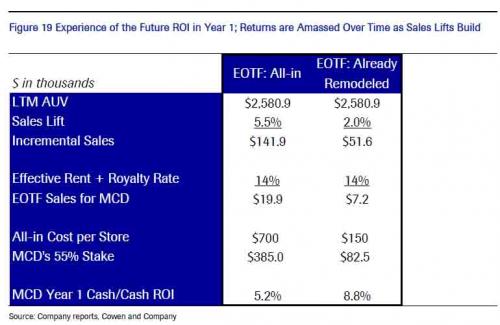 The stock market is luvin’ McDonalds stock, which has continued its recent relentless rise to all time highs, up 26% YTD, oblivious to the carnage among the broader restaurant and fast-food sector. There is a reason for Wall Street’s euphoria: the same one we discussed in January in “Dear Bernie, Meet the “Big Mac ATM” That Will Replace All Of Your $15 Per Hour Fast Food Workers.”

In a report released this week by Cowen’s Andrew Charles, the analyst calculates the jump in sales as a result of the company’s new Experience of the Future strategy which anticipates that digital ordering kiosks (shown above) will replace cashiers in at least 2,500 restaurants by the end of 2017 and another 3,000 over 2018. Cowen also cited plans for the restaurant chain to roll out mobile ordering across 14,000 U.S. locations by the end of 2017 (we did not show that particular math, but the logic was similarly compelling).

Here is a snapshot of the math that Cowen, likely in conjunction with management, used to come up with the cost-savings as McDonalds increasingly lays off more and more minimum wage workers and replaces them with “Big Mac ATMs.”

MCD is cultivating a digital platform through mobile ordering and Experience of the Future (EOTF), an in-store technological overhaul most conspicuous through kiosk ordering and table delivery. Our analysis suggests efforts should bear fruit in 2018 with a combined 130 bps contribution to U.S. comps. We believe mobile ordering better supplements the drive-thru business where 70%+ of U.S. sales are transacted. In our view, MCD’s differentiation lies in the operational enhancements of mobile ordering that includes curbside pick-up of orders in order to not disrupt the drive-thru.

Below we show Cowen’s full math laying out why the restaurant chain’s client-facing fast food workers are now obsolete:

We are constructive on the use of guest facing technology for the restaurant industry. MCD’s longer-term U.S. story revolves around Experience of the Future (EOTF), a holistic operational and technological overhaul to the store base. MCD’s March 2017 investor meeting centered around the initiative with interactive displays. Perhaps the most conspicuous piece of Experience of the Future lies in digital kiosk ordering, which have seen success in International Lead Markets. Additionally, food ordered via the kiosk is delivered to the customer’s table. We believe EOTF better enhances the instore experience, which represents roughly 30% of domestic sales compared to mobile ordering, which allows customers to avoid leaving their cars.

Our ROI math suggests EOTF leads to a 9% cash/cash return in Year 1 in the 55% of domestic stores that do not require a store remodel, and 5% in the 45% of stores that require a remodel, which is a predecessor to implementing EOTF. Our math is premised on total costs of $150,000 for the Experience of the Future enhancement, and $700,000 of all-in costs when including EOTF as well as a store remodel. MCD has offered to pay 55% of the cost for Experience of the Future, in excess of the 40% the company contributed to the store remodel initiative beginning in 2010, for restaurants that commit to the program by the end of 2017.

McDonald’s targets a high-teens return on incrementally invested capital (ROIIC, or McSpeak for evaluating ROI), improving to the mid-20% range beginning in 2019. We believe EOTF’s ROI is captured over time as the sales lift does not dissolve as in the case of a traditional restaurant remodel. Rather, the lift should sustain as we expect consumers to increasingly embrace technological change. This is evidenced across concepts, such as Panera’s experience with 2.0, as well as McDonald’s own experience in Canada, where kiosks saw 12-13% sales mix in Year 1 and 27% in Year 2. We also note kiosk ordering will also likely lead to labor savings over time which should help boost ROIIC, but is unlikely for the foreseeable future.

In 2017, MCD expects to end the year with EOTF offered in 2,500 domestic locations from 500 at 2016-end. MCD targets the majority of domestic locations to feature EOTF by 2020, but has not given intermediary targets. The amount of stores adding EOTF depends on franchise reception to the initiative but we see positive indicators given our checks as well as the company’s disclosure that 90% of franchisees approved of the initiative after taking the same interactive tour that was given at the March 2017 investor day.

We estimate 3,000 locations to add EOTF in 2018, which should lead to a 70 bps contribution to U.S. same store sales assuming an even cadence of restaurants adding the initiative over the course of the year. Further we assume the mix of stores adding EOTF in 2018 reflects the mix of overall stores needed to add EOTF, or 55% of stores that already have a remodel while 45% require a store remodel. McDonald’s  has previously announced plans to remodel 650 restaurants in 2017, which we expect will also add EOTF. 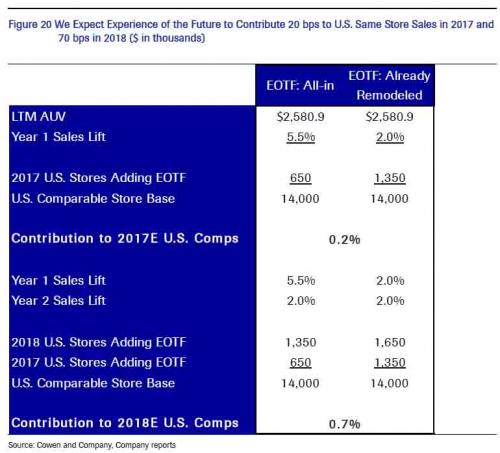 Summarizing all of the above: the workers you see in the photo below are now an endangered species.