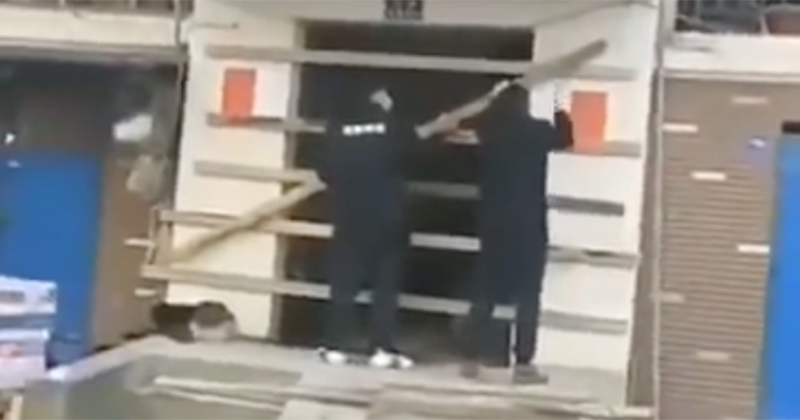 Radio Free Asia (RFA) has tweeted a disturbing video on its Twitter account Tuesday morning detailing how some residents in Kunshan, Jiangsu, a city in southeastern Jiangsu province with Shanghai bordering its eastern border and Suzhou on its west, are forcibly removing people from their homes who refuse to be quarantined.

RFA said (in a translated tweet): “[Residents of Kunshan, Jiangsu refused to be quarantined] [Forcibly taken away by staff members] Online circulated clips, a group of personnel wearing protective clothing of “Kunshan City Governance” went to a household to persuade the residents to prepare for packing to be isolated, but the head of household refused to cooperate.

The staff then entered the house and took the residents one by one and sent them to the ambulance. The male head of the household questioned the staff members for breaking the law and fiercely resisted. During this period, the staff members’ protective clothing was broken and they tried to hide under the car.”

Savanah Hernandez delivers a special report on the actual tyranny now taking place in China as the government continues their brutal crack down on their own population.

Local media, QQ.COM, reported that some residents in Jiangsu were being locked in their homes by authorities.

In one video, it shows a person inside an apartment, who can’t leave because authorities mounted metal piping across the door frame.

Two videos show all floors of a residential building in Jiangsu-China were blocked by welding fence because a confirmed case found in it. #2019nCoV #WuhanCoronavirus #WuhanVirus pic.twitter.com/C5i4UMltjl

China has shut down over a dozen cities and made it mandatory that more than 50 million people stay home while the virus runs its course.