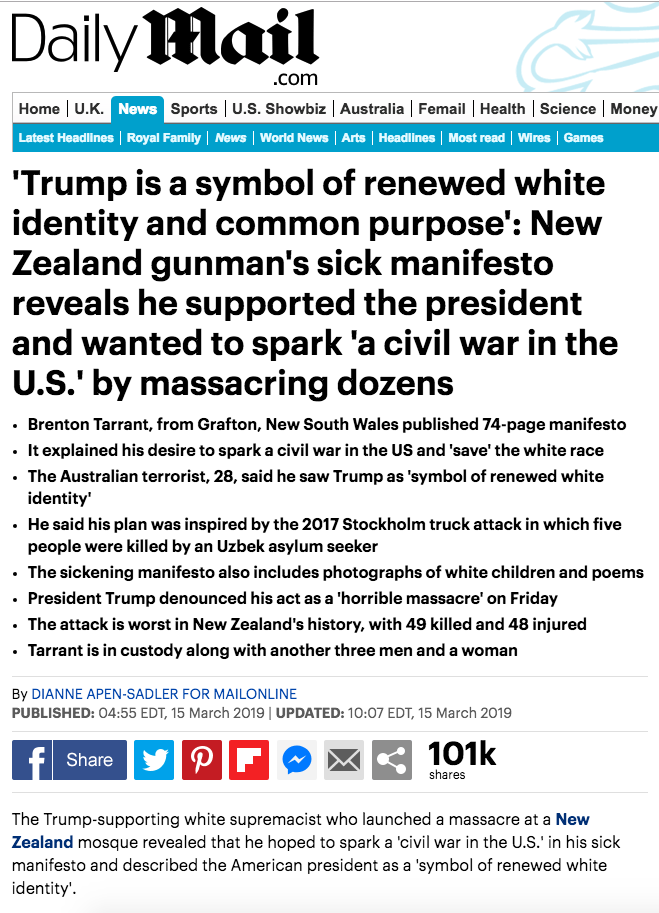 Several media personalities, celebrities and news outlets are reporting the New Zealand terrorist who killed 49 people at multiple mosques on Friday is a supporter of U.S. President Trump.

Many are focusing on a portion of the shooter’s manifesto where he answers the question, “Were you/are you a supporter of Donald Trump?” by saying, “As a symbol of renewed white identity and common purpose? Sure. As a policy maker and leader? Dear god no.”

The first half of the answer is the only portion being widely reported, while the “Dear god no” statement is being totally ignored.

See the slanted coverage for yourself in the following posts.

This mass murderer’s manifesto invoked Trump as his hero. Trump is knowingly inspiring racial hatred and violence. And he has begun linking such talk to what’ll happen if we dare to remove or replace him — even at the polls. Like the dictators he admires.https://t.co/nlprn76HSo

The terrorist in Christchurch considered Mr. Trump a “symbol of renewed white identity.” This president has given license to white supremacy in America that has spread across the world. Is there any question left about the message he’s sending? Racist murderers see him as a hero.

Does anyone doubt that Donald Trump inspired the New Zealand massacre? https://t.co/JVTJQOZaC9

“There are real consequences to dehumanizing a community & one of those consequences is that ppl treat their lives w less value.”https://t.co/RPYvp379Zr

I just want people to remember Trump has said "Islam hates us," retweeted fake anti-Muslim videos by hate group Britain First, promoted a Muslim Ban, spread anti-semitic Soros conspiracy theories, demonized immigrants is & surrounded by people who believe it. There is a cost.

Trump is a match in search of a fuse. pic.twitter.com/0Yq2KF0tiL

Council on American-Islamic Relations to @realDonaldTrump: "Your words matter. Your policies matter … You should condemn this not only as a hate crime, but as a white supremacist terrorist attack … You need to condemn this community today."

The White House responded to those connecting Trump to the shooter with White House director of strategic communications Mercedes Schlapp, saying, “It’s outrageous to even make that connection between this deranged individual that committed this evil crime to the president, who had repeatedly condemned bigotry, racism, and has made it very clear that this is a terrorist attack.”

Alex Jones covers the attack in the following video:

Watch Jon Bowne’s epic report exposing the true beleifs of the shooter below: