Interview was like high noon to the establishment media vampires

The establishment media was thrown into a tizzy when Katie Couric on Wednesday used her daytime TV platform to interview distraught mothers who blamed their daughters’ deaths on the HPV vaccine Gardasil.

Following her December 4 episode, scores of publications went into PR mode in defense of Big Pharma, launching vicious coordinated attacks on Couric for daring to question the vaccine’s efficacy.

“Vaccine Disinformation: Katie Couric on HPV and Jenny McCarthy on Autism,” the Washington Times dutifully spewed out. “Has Couric Lost Her Cred on HPV?” asked a writer at the Daily Beast, as if the TV personality ever had “cred” on vaccines to begin with. And the Atlantic Wire did its part with a headline that read, “Katie Couric Feeds the HPV Vaccine ‘Controversy.’”

“We guess ABC will do anything to bring Katie out of its ratings hole, because the HPV vaccine has been proven to be absolutely safe for girls,” the Wire wrote. According to them, stories about people who died after receiving the vaccine mean it’s “absolutely safe.” 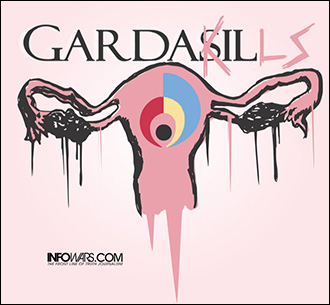 The outraged publications, in addition to Gardasil manufacturer Merck, advised their readers to look to the CDC and the FDA for their health info – the same CDC that earlier this year memory holed (including on Google’s cache system) pages dedicated to the history of the polio vaccine – a vaccine “contaminated” with a cancer-causing primate virus that was distributed to some 10 to 30 million Americans. Why the CDC wouldn’t want to display this information is anyone’s guess.

To the vaccine advocates’ dismay, Couric also invited Dr. Diane Harper, a professor at the University of Louisville and leading HPV expert, to provide insight into why she did a complete 180 on the vaccine.

“Why initially did you think this was such a positive development for cancer prevention?” Couric asked.

“I was very excited initially because I thought, ‘Yay! We have a vaccine. This could be really important, especially in countries that don’t have any screening with it,’” Harper said. “But then I started looking at what isn’t covered, and I looked at the fact that Gardasil doesn’t last long enough to prevent cervical cancer and HPV infections are something that women continue to get throughout their lifetime.”

Harper continued: “The other thing that, in looking through CDC data as well as other published data, is that HPV is most often sexually transmitted, but between the age of birth and 11 years of age, 10 to 15 percent of these children are already infected with these high risk types. So it isn’t that you’re completely negative until you’re 11 years of age and then you’re at risk. There is an underlying infection rate already that’s there.”

An internationally recognized HPV expert actually speaking out on the dangers of a vaccine? Make no mistake, this info was like high noon to the establishment media vampires.

Here are some additional links on how Gardasil is “absolutely safe”:

• Time for the Truth about Gardasil