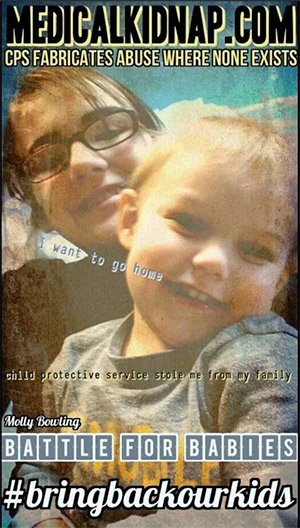 A young couple was forced to spend the holidays apart from their three children after a routine trip to the hospital resulted in their offspring’s confiscation.

When South Dakota couple Molly Bowling and Michael Becker discovered their two-month old, Creedance, had a cut on his tongue that was making eating difficult, they did what any parent would and called their doctor.

“He wouldn’t eat. When he was crying we would see the cut on his tongue, so I called his doctor and he said we should take him to the ER. So we went to the ER,” Bowling told KSFY.

Once the Sioux Falls couple explained they believed Creedance may have been harmed in daycare, staff members reached out to the non-profit child abuse organization Children’s Voices who advised the hospital to keep the infant overnight.

“It all happened so fast,” said Becker, according to MedicalKidnap.com. “Next thing I know, we’re being questioned by CPS and detectives.”

CPS then went and inspected the home where the family’s other two children were staying with their grandparents and deemed it suitable, however, authorities declared parents Molly and Michael would have to stay somewhere else.

Later, police were reportedly sent to question the parents separately. When Becker felt he was being given the third degree, he asked for an attorney. Molly says, “everything came downhill after that.”

“As soon as I asked for a lawyer… they came here and took the other kids out of the house,” Becker said to KSFY, describing how CPS also nabbed Noah, 2, and two-year-old Robin, despite them not being the subject of focus.

Becker and Bowling say they’ve tried to ask the state how to get their kids back, but that phone calls to CPS are largely ignored, and that an attempt to ask the agency for proof was met with the response: “We don’t have to prove it.”

“It makes me scared to take my kids to the doctor ever again,” Becker admitted. “When we do get them back I’m just going to wrap all of my kids in bubble wrap so nothing ever happens to them, because if you do have to take them to the doctor, this is scary that this could happen.”

Michael told Medicalkidnap.com he “’thought taking him to the hospital was the right thing to do.’ Yet now, ‘we’re being looked at as though we beat a 2 month old.’”

Division of Child Protection Services, Division Director Virgena Wieseler said Creedance was likely confiscated because of the suspiciousness of his injury.

“The only time a medical professional is going to contact law enforcement or child protection is if the child presents with an injury and the explanation by the caregiver or the parent is inconsistent with that injury,” she told KSFY.

“Parents should not be afraid to take their children to the doctor,” Wieseler claimed.

Bowling and Becker say their children’s health is deteriorating in foster care, a revelation consistent with studies that have found children in state custody to be 10 times more likely to be abused and 600 percent more likely to be beaten, burned, starved or neglected.

To this day, Molly and Michael have only seen their babies once since their seizure by CPS. Michael reports that the baby now has a “horrendous cough” since being in CPS custody, and Molly says that his little face is all scratched up. She never let that happen because she kept his nails clipped. That doesn’t appear to be happening now. Robin is “not herself” and had diarrhea.

Bowling and Becker started a Gofundme account seeking donations to help with court fees. Bowling’s last update says she was only allowed a two-hour visit with her children four days ago, and that they missed Noah’s third birthday.

“It is frightening to think that Child Protective Services can snatch children away from parents without proof,” writes Terri LaPoint. “Babies need their parents. Infants cannot comprehend the separation from their mothers; and research shows that such separation is deeply traumatic for them emotionally, even when justified. One must ask, how is it justified to take children away from parents for nothing more than an isolated accidental injury?”