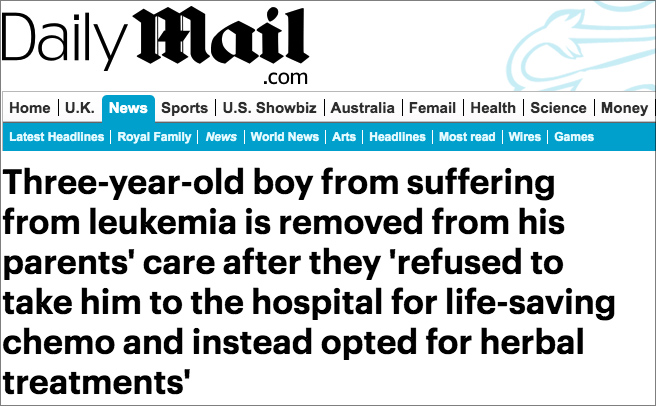 Joshua McAdams and Taylor Bland-Ball have been arrested and are facing charges of child neglect for choosing to stop doctor-recommended chemotherapy treatments for their son Noah after he was cleared of cancer.

The Florida couple claims Noah has been cancer-free for over two weeks after going through two rounds of chemotherapy, specifically vincristine, but doctors at Johns Hopkins All Children’s Hospital in Saint Petersburg, Florida wanted to continue with chemotherapy against the parents’ wishes.

“We busted on out of that hospital – with no cancer cells left to spare,” Bland wrote on an April, 16 Facebook post.

She also detailed the regimen used for curing Noah, who suffered from acute lymphoblastic leukemia:

“For those asking, we did two rounds of chemotherapy, specifically vincristine because they can get a medical court order to force you to do it anyways for a child with his diagnosis, we also used rosemary, Vitamin B Complex, including B17, completely alkaline diet, a liver/kidney/gallbladder/blood herbal extract, daily colloidal silver, high dose vitamin c, collagen, Reishi mushroom tea and grapefruit peel and breastmilk!”

After the hospital notified police that the parents didn’t show up to a “necessary” chemo treatment on April, 22, the Hillsborough County Sheriff’s Office released a statement reading, “MISSING ENDANGERED CHILD!”

“On April 22, 2019 the parents failed to bring in the child to a medically necessary hospital procedure. The parents have further refused to follow up with the life saving medical care the child needs,” the post read.

Law enforcement also tried to paint the father as being potentially dangerous because he could have a weapon, which would be legal as McAdams isn’t a felon.

“The parents have possible criminal child neglect charges pending. Please use caution as the father is potentially armed,” they said.

After a multi-state manhunt, the family was located in Kentucky on Monday and the Sheriff’s Office added an update saying, “He is in need of medical attention, but safe. Thank you to the community for getting the word out.”

Local media followed suit and sided with the government, writing headlines such as “Endangered 3-year-old who needs medical treatment found in Kentucky” and “Missing Florida toddler in need of ‘lifesaving medical care’ found in Kentucky.” 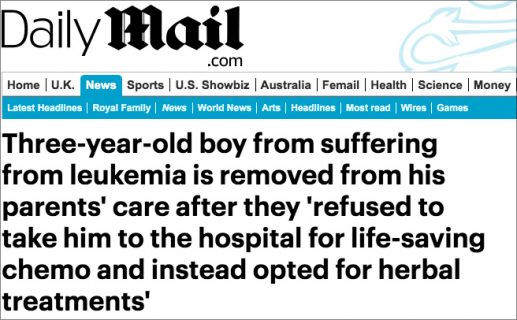 To see how the average American feels about the government’s treatment of the family, look no further than the thousands of comments on the Hillsborough County Sheriff’s Facebook post. 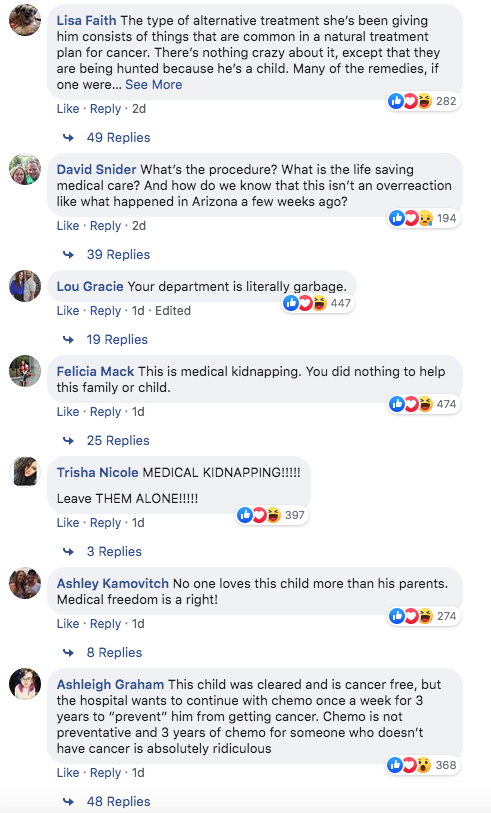 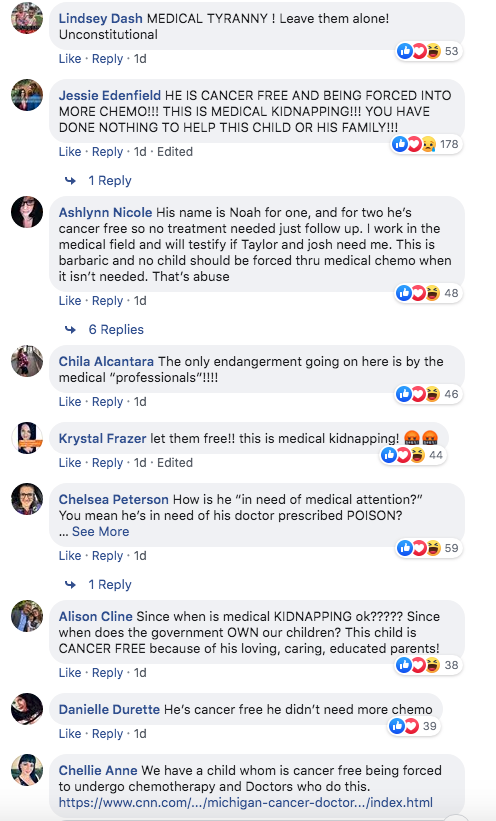 After the couple was arrested, Noah was handed over to Child Protection Services and was reportedly given medical care, although it’s unclear what care was given.

In a Facebook post on Tuesday, family friend Desirae Sarah relayed an update on behalf of Bland and McAdams, saying, “They are currently in KY in a hospital. Taylor, Joshua, and Noah together. Noah had all his levels tested and they came back ABOVE AVERAGE. He is THRIVING and get this – CANCER FREE.”

“Noah will be flown back to Florida in the next hour or so. The state of Florida is taking Noah into custody. They will have a court date about this in the near future to determine what will happen next. Taylor and Joshua will be flying back soon after as soon as they book a flight,” Sarah wrote.

I just spoke to this beautiful lady and was asked to share an update! They are currently in KY in a hospital. Taylor,…

Hours later, Bland uploaded an image to Facebook with a long message about the poor conditions of the Kentucky hospital they were sent to.

“After we complained about the fact that they put his hospital band on so tight it cut off his circulation, we found an old bloody syringe under his bed, a sharp random screw in front of his door and the bathrooms were left with urine and feces on the floor for hours after we mentioned it,” she revealed. “These are the providers we are supposed to blindly hail to, to care for our baby.”

My sweet little man, he got to rest on my chest for a nap one last time before they escorted us from the hospital…..

Wednesday afternoon in Florida, court proceedings for the parents were allegedly postponed until Friday because Johns Hopkins All Children’s Hospital representatives don’t want the proceedings to receive media coverage.

“We say LET THEM IN. We have FREEDOM OF PRESS,” Bland announced on Facebook. “Their excuse is that its a child private health information. Wait you mean the medical information that was already blasted all over social media and the news when he was ‘endangered’???”

“We have no answers as to where our child is, what he has received, who is watching over him,” Bland noted.

Our proceedings have been postponed until friday at 130pm, because the hospitals representatives dont want media…

An event to show support for Noah and his family will be held on Saturday, May 4 at Johns Hopkins All Children’s Hospital in Saint Petersburg, Florida and a legal fund has been set up for those who wish to donate. 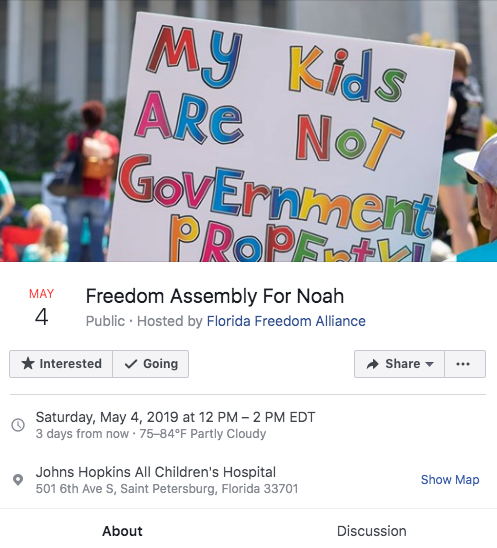 WFLA News Channel 8 covered the ongoing story in the video below:

WFLA NOW: Hillsborough parents fighting to get sick son back after removing him from hospital

PARENTS FIGHTING FOR SON WITH CANCER: A local family at the center of a medical custody battle is fighting to get their son back after fleeing with him to Kentucky to avoid chemotherapy treatments. Hear from the parents on WFLA NOW. wfla.com/1970785289

Fox 13 Tampa Bay also did a segment on the case: