Mitt Romney, the establishment declared GOP front-runner, is the white Obama. He earns this title because on crucial issues he mirrors Barack Obama. Consider: 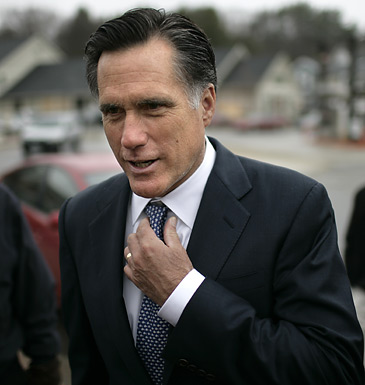 He has stated that the theory of anthropogenic global warming is real. In 2005, as governor of Massachusetts, Romney imposed strict state limitations on carbon dioxide emissions from power plants. In a memo issued by Massachusetts Lieutenant Governor Kerry Hale, the Romney administration bragged that it was “the first and only state to set CO 2 emissions limits on power plants.”

In short, Romney did what Obama’s EPA wants to do now. It is revealing that Romney was advised on this drastic step by none other than Obama’s chief science adviser, John Holdren.

In his book, No Apology, Romney advocates carbon taxes through a “tax-swap plan” and declares that resultant “higher energy prices would encourage energy efficiency.” The plan is favored by economist and Romney adviser Greg Mankiw and many other “Republican-leaning economists.” In 2007, Mankiw wrote an op-ed for the New York Times entitled “One Answer to Global Warming: A New Tax.” He wrote that “if we want to reduce global emissions of carbon, we need a global carbon tax.”

Obama also wants to push a carbon tax on the American people and declared his intention to do so before he took office. “President elect Barack Obama used his speech at a Los Angeles summit last night to reinvigorate a push for the revival of a frightening proposal to slash carbon emissions by 80 per cent, a move that would inflict a new Great Depression, cost millions of jobs, and sink America to near third world status,” Paul Joseph Watson wrote on November 19, 2008.

Obama’s agenda to cut carbon emissions by 80 per cent fits right into the globalist plan to attain the ultimate civilization-killing goal of zero carbon emissions, as espoused by the Carnegie Institute.

In December, Romney told Fox News that he stands by the health care at gunpoint plan implemented while he was governor of Massachusetts. “The plan is not perfect, there are things that I’d change in it, but I’ll stand by the things we’ve done,” he said, defending the plan.

Obama and the Democrats were so enthralled with Romney’s statist health care boondoggle, they based their plan on it.

Like a good Demopublican, Romney supported a woman’s “right” to kill her fetus – that is before, as a “conservative,” he changed his mind – or as it is usually called, he flip-flopped on the issue.

He was so adamant about abortion, he attended a Planned Parenthood fundraiser in 2004, but now supports the Pence amendment sponsored by Indiana Republican Rep. Mike Pence aimed at eliminating all Title X grants for Planned Parenthood. He even instituted tax-funded abortion on demand two years after his orchestrated “pro-life” conversion.

Obama, of course, is “pro-choice” and has appointed a number of outspoken pro-abortion advocates to his administration. If elected, no doubt Romney will do the same.

Mitt claims to oppose illegal immigration, but does not advocate sending illegals back – or, apparently, even arresting them for breaking the law.

“Those people that are here illegally today should have the opportunity to register and to have their status identified,” he said in November.

He said nothing about illegal immigrants paying back taxes, learning English, not having criminal records, or being deported and going through legal channels for immigration.

Romney sounds a lot like Obama, who said: “I think most Americans feel there should be an orderly process to do it. People shouldn’t just be coming here and cutting in front of the line essentially and staying without having gone through the proper channels.”

Mitt Romney is basically indistinguishable from Obama and supports the same globalist agenda, albeit with “conservative” flourishes. His flip-flopping on key issues is designed to make his pre-arranged agenda more palatable to so-called conservatives, who will naturally be hoodwinked as they are every election cycle.

If elected, Romney will become the white Obama. The only job requirement will be an ability to convincingly read a teleprompter and follow orders handed down form his globalist masters the same as his predecessor.