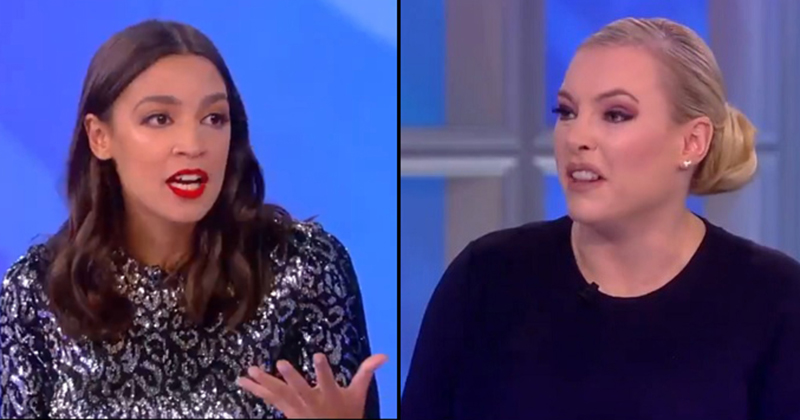 As far as I can tell, this is supposed to make the Bernie Bros look bad.

On Wednesday, Meghan McCain confronted Rep. Alexandria Ocasio-Cortez over “deeply misogynistic” and “violent” supporters of Bernie Sanders on “The View.”

“The one thing that connects women on the left and women on the right, at least a lot of guest co-hosts, guests that come on, is the abuse that we have all been subjected to by the Bernie bros. It is by far the most violent, most misogynistic, the most sexist, the most harmful [– my mother has cried over doctored photos Bernie bros have sent me],” McCain told AOC, adding that “it’s disgusting and vitriolic.”

When asked about Sen. Bernie Sanders’ reaction to the online attacks made by so-called ‘Bernie Bros,’ Rep. Alexandria Ocasio-Cortez says, “We have to always reject hate, reject vitriol, and denounce that kind of behavior.” https://t.co/cVclFZQmjA pic.twitter.com/SN6GUjC9AV

“How do you feel that he’s attached to this deeply misogynistic and I would go so far as to say violent sector of people?” she asked.

AOC, of course, threw them straight under the bus.

“Yeah, you know, I think internet culture can often be very toxic,” AOC said. “I think that to a certain extent we have to always reject hate, reject vitriol, and denounce that kind of behavior.”

Owen explains why AOC and the left are oblivious to the hate for communism that Americans have.

Whether it’s Trump or AOC, these politicos love to feed off the energy of their base and use it to propel themselves into office only to turn their backs on them to please our pathetic ruling class.

Could you imagine denouncing your own supporters to please Megan McCain?

When Bernie gets screwed out of the nomination — or on the off chance he wins, screwed out of his presidency by a deep state coup just as happened with Trump — dejected Bernie Bros and MAGApedes should come together to form a “third way” populist-nationalist movement as laid out by Tucker Carlson.