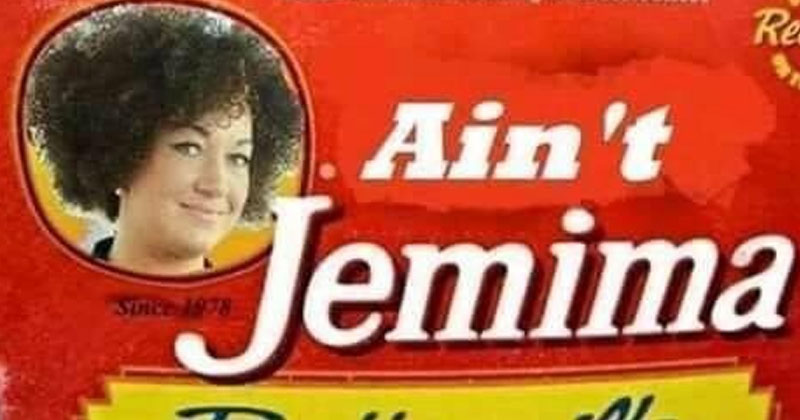 “We recognize Aunt Jemima’s origins are based on a racial stereotype,” Kristin Kroepfl, vice president and chief marketing officer of Quaker Foods North America, said in a press release Wednesday.

“As we work to make progress toward racial equality through several initiatives, we also must take a hard look at our portfolio of brands and ensure they reflect our values and meet our consumers’ expectations.”

Memes on social media were abound mocking Democrats, companies, and social justice warriors in this latest corporate pandering to the outrage mob.

Aunt Jemima being cancelled made me think of this classic scene from the Fresh Prince pic.twitter.com/daPbGeQOZH

They cancelled Aunt Jemima??? I DONT THANK SO pic.twitter.com/IhJ2JycYxz

Why are they cancelling Aunt Jemima? Did President Trump pour it on his pancakes?

Hey @GeneralMills when will you be removing this offensive racial stereotype of short drunken Irishmen? Just kidding. We Irish don't give a shit. Your cereal is cancer. #AuntJemima pic.twitter.com/7AsQPFVADh

People seem to have an issue with Aunt Jemima.
Well how about this new bottle design? pic.twitter.com/XxyI59zPjy

Aunt Jemima is degrading to black women but Cardi B isn't?

I bet the lady who stars in those Popeyes chicken commercials is sweating right now #AuntJemima pic.twitter.com/dnUyZgQu7S

Aunt Jemima: Gets canceled by leftists

Goodbye Aunt Jemima. We barely ever used your syrup in this household, but there is something else that comes to mind whenever I hear of you. #AuntJemima 🥞 🧇 pic.twitter.com/muKAIpRG8E

There's NOTHING sad about #auntjemima I love her pancakes and syrup! pic.twitter.com/Ikk78RvEd7

The cancel mob rages against Howard Stern. What’s a pervert to do? Gov “Coonman” Northam can save Howard the Coward. Here’s how…