Harry’s, a men’s grooming company, chose to celebrate ‘International Men’s Day’ by launching an attack on ‘toxic masculinity’ via a social media advertisement that was poorly received and has prompted many to boycott the brand.

The company, whose target demographic audience is almost exclusively men, many of whom are ‘Millennials,’ released the ad on Facebook and Twitter, where it is being torn apart by both male and female users – prompting Harry’s to double-down on their virtue signaling in response.

“Today is International Men’s Day. Believe it or not, that’s a thing,” Harry’s captioned. “If 2017 has taught us anything, it’s that we need to rethink what it means to be a man. Now more than ever, being a man demands introspection, humility, and, we believe, optimism. To get to a better tomorrow, we need to take a look at today, and at the misguided stereotypes that got us here in the first place.”

The ad itself is a video meme highlighting ‘misguided stereotypes’ presented in the form of common phrases one might associate with masculinity, toughness, and traditionalism, such as “Be a man,” “Be a rock,” “Be the bread winner,” and “Boys will be boys.”

After crossing a red line through each ‘toxic’ expression, the final message reads, “It’s time for a new definition of masculinity.”

Today is International Men’s Day. Believe it or not, that’s a thing.

Now more than ever, being a man demands introspection, humility, and optimism. To get to a better tomorrow, we need to take a look at today, and at the misguided stereotypes that got us here in the first place. pic.twitter.com/1lViZqWbIx

As with many ill-fated attempts by organizations and businesses to mix left-wing politics with advertising, the response has been overwhelmingly negative, and despite having nearly 370,000 views on Facebook at the time of this writing, the post has generated less than 800 positive reactions, and a mere 310 shares.

While the ad offers a small semblance of neutrality that could garner benefit of the doubt from less cynical or discerning observers, replies by the company in the comments sections dispel uncertainty about their angle or position, leaving many to speculate if ardent feminists or “soy boys” are running the show at Harry’s.

“We repeat: toxic masculinity is the problem, not being a man,” Harry’s wrote in reply to the most popular comment on their Facebook post. “There’s a big difference and we’re excited to help move this conversation along.”

“2017’s hot business strategy: virtue signal against your customer base to those who aren’t interested in your product,” wrote one savvy Twitter user. 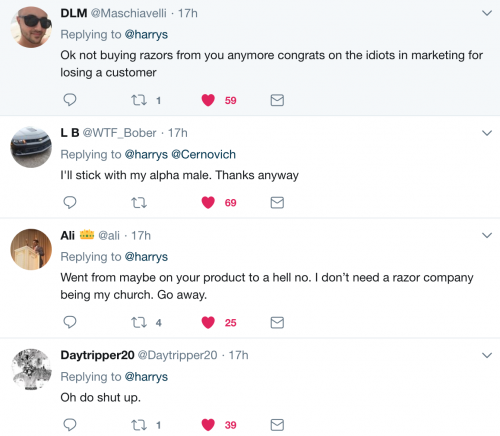 Harry’s is just the latest in an ever-growing list of companies torpedoing swaths of their customer base by espousing or supporting the radical left-wing/globalist agenda, which includes ESPN, Kellogg’s, Nordstrom, the NFL, Camping World, Pepsi, and Starbucks.

UK supermarket chain Tesco recently sparked international backlash and vows of a boycott with their first commercial of the Christmas season by prominently featuring Muslim in hijabs, a gay couple with a baby, and a Sikh man, while whitewashing Christianity out of the ad.

Merchants who mix their politics with business do so at great risk in the current era, prompting some to wonder why they attempt it at all.