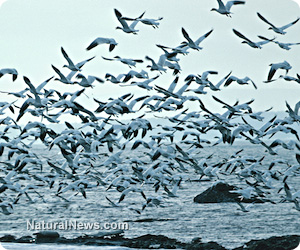 In a rather bizarre, and perhaps even controversial, study that looked at the mating behavior of ibises, a tropical bird species that to some extent resembles a seagull, researchers from the University of Florida, Gainesville, (UFG) found that exposure to mercury disrupts the birds’ endocrine systems and leads to decreased offspring. Not only this, mercury exposure was also found to cause some male ibises to pair up with other males rather than females, exhibiting a type of chemical-induced homosexuality that is rarely the topic of scientific inquiry.

Published in the journal Proceedings of the Royal Society B, this study reveals that methylmercury, the most toxic and easily absorbed form of mercury found in the environment, is capable of literally altering sexual preference, at least in ibises. What has otherwise never been observed in wild ibises, homosexual behavior, was observed for the very first time in carefully controlled tests, suggesting that determined sexual orientation could have a chemical component.

Peter Frederick, an ecologist at UFG, and his colleagues wanted to see how methylmercury, which is often hiding in wetlands and other natural environments, is affecting ibises. So the team collected 160 of the birds from breeding colonies in South Florida and divided them up into four test groups. Each group was composed of 20 males and 20 females, and after 90 days, the first three groups received either low, medium or high doses of mercury in their feed. The fourth group received control feed without mercury.

The birds in the first group received 0.05 parts per million (ppm) of mercury in their feed, while the second and third groups received up to 0.3 ppm. These amounts were carefully selected to reflect what wild birds living in the area and in other parts of the world might encounter in the wild from pollution runoff and other sources. The control group, of course, was designed to replicate wild ibises living in more remote areas that do not encounter mercury.

After three years of studying the birds and analyzing their various behaviors, the team came to some shocking conclusions. Not only were the mercury-exposed male ibises less prone to mate with females and produce offspring, but they were also more likely to try to mate with other males. And even when this proved to be a failure — non-exposed ibises typically give up on trying to mate with certain females after the first year if they are unsuccessful — many of the mercury-exposed birds continued in long-term relationships with other males, which is completely outside their normal behavioral pattern.

“Methylmercury seems to cause these behavioral changes by affecting the endocrine system, which controls the release of hormones in the body,” Frederick is quoted as saying in the journal Nature. “That effect alters levels of the sex hormones testosterone and oestradiol in male ibises.”

“Mercury is a known endocrine disruptor, but this is the first study of endocrine disruption in birds,” adds Frederick. “This study links detrimental effects on biochemistry to decreased reproductive success very plausibly, through altered pairing and courtship behavior.”

A similar but unrelated study on nematode worms published in the journal Current Biology back in 2007 found that the brain, which is highly affected by chemical exposure, determines sexual orientation, at least in this particular species. The authors of this study concluded that sexual attraction in nematode worms is literally wired one way or the other in their brains and that this wiring can be altered by external factors or inputs.