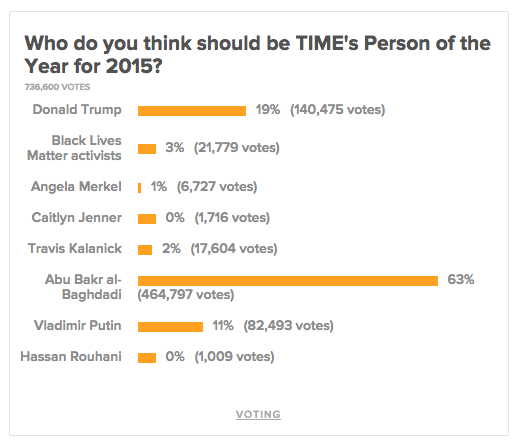 Time released its shortlist of the final contenders, and surprisingly al-Baghdadi and Jenner made the list, especially considering that the latter never actually went through a complete sex change.

The magazine, which has strong ties to the State Dept., said al-Baghdadi was included on the list because he “inspired followers to both fight in his self-declared caliphate of Iraq and Syria, and also stage attacks in countries like Tunisia and France,” but Time, of course, left out the tremendous support ISIS receives from NATO nations.

And it’s been previously documented that Turkey was smuggling firearms and missiles to ISIS after training its fighters.

Now, as far as Jenner’s selection as a final contender, Time actually put in effort to praise her “coming out as a transgender woman” for prompting “widespread conversations about gender identity and issues of equality for the LGBT community.”

“…The expectations she faces now are far more complicated,” the magazine stated. “Her life, with all her fame, money and connections, doesn’t resemble those of many in the [transgender] community she wants to help.”

“That means she has an unprecedented opportunity to open minds.”

But Time ultimately chose Merkel as its ‘Person of the Year,’ a strange selection considering that when NBC asked viewers their choice for the award, only 1% of over 736,000 votes went to Merkel.

It’s obvious the magazine has an agenda to push because Merkel is extremely unpopular in Germany after opening the country’s borders for hundreds of thousands of Muslim migrants.

“Merkel has so far refused to back-down from her policy or impose a limit on the number of asylum seekers the country will take,” the Telegraph reported. “Some 950,000 are believed to have entered Germany this year – considerably more than the official government forecast of 800,000.”

“The numbers, inevitably, will keep growing.”

Now almost half of Germans don’t want her to run a second term.