The first sellside comments on today’s German elections – which as a reminder was a disaster for the German establishment, following the worst showing for the CDU/CSU since 1949 and the worst result for the SPD since 1945 with support for both parties tumbling since the 2013 elections…

… have started to trickle, in and according to SEB, the result is ‘less market-friendly’ than expected.

Quoted by Bloomberg, SEB cross-asset strategist Thomas Thygesen said that the result is a victory for Angela Merkel as expected, but her mandate going into negotiations about deeper euro integration does not look quite as strong.

“It looks like marginally less market-friendly than expected,” Thygesen said adding that “I’d say this is in line with our expectation that the euro would pause around $1.20 vs dollar and then maybe retrace a couple of percent over the autumn.”

“The AFD above 10% suggests that even here the stakes are high: if the European project doesn’t fly this time in a way that voters like, Germany could look less politically stable in a few years.”

A note from Pantheon’s Claus Vistesen is similarly concerned about the election outcome and the viability of the upcoming coalition:

At a first glance, it seems that building a coalition government will be a little trickier than markets had expected. If the exit polls prove accurate, the major parties—CDU and SPD—have suffered a drastic setback compared to the elections in 2013. CDU is projected to come out top with 32.5, of the votes, but this is far-, from the 42% in 2013. Similarly, the social democratic SPD have been pegged back to 20%, compared to just under 309, in 2013. The voter-flight from the two main parties appears to have gone in two opposite directions. The populist—and nominally EU sceptic—AFD is set to become the third-biggest party in the Bundestag with 13.5% of the votes, significantly better than the polls were predicting heading into today’s vote. But the liberal FDP also is expected to have had a good day, securing 10.5% of the votes.

Assuming the exit polls are accurate, Angela Merkel—who almost surely will remain as chancellor—has two options, assuming that a government with AFD is out of the question. She can form a two-party grand coalition with SPD or she can go for a coalition with the greens—set to gain 9.4%—and FDP. Our bet is on the latter—we doubt the SPD will go into a grand coalition given its after all scathing defeat—but this will be a slender coalition. Mrs. Merkel is a battle-hardened builder of coalitions, but she will need to draw on all her experience to form one, which can actually get things done.

On balance then, we see the exit polls are slightly negative from the point of view of risk assets in the Eurozone and the euro exchange rate.

The result also increases the risk of re-elections, but we would put the probability of this at under 15%.

Finally, in yet another shock for Germany’s establishment, according to Europe Elects, the nationalist AfD was the second strongest party in former East Germany, the more economically backward segment of Germany. 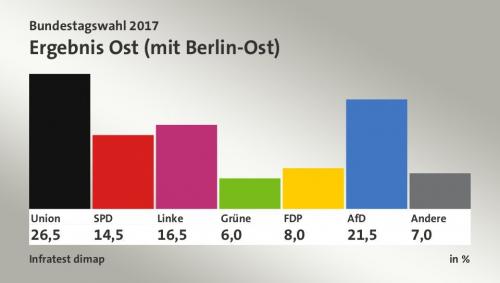 We now await other analyst observations which we expect will be equally dour on today’s election result, and as a result the EURUSD is set to tumble once it opens for early trading.