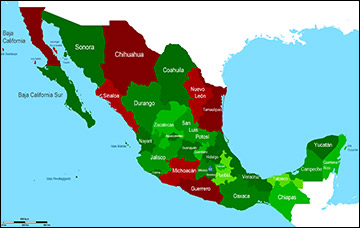 Police in Mexico’s western state of Michoacan have arrested an alleged member of the Knights Templar cartel on suspicion of kidnapping children to harvest their organs.

Manuel Plancarte Gaspar was accused by police on Monday of being part of the cartel’s organ-trafficking ring and the state attorney general’s office said he was “under investigation for the death of minors, whose organs were extracted to be sold.”

Michoacan’s public safety secretary Castellanos Becerra said the ring would kidnap children and take them to homes fitted with medical equipment where they were killed and their organs removed.

“We have several statements … that point to a network of suspects [that would target] children and kidnap them,” the Associated Press news agency quoted him as saying.

Becerra said the cases go back several years, but said he was unable to release further because the case was ongoing.

A nephew of the number two leader of the Knights Templar cartel, Plancarte Gaspar, was arrested last week along with another suspect in a stolen car in possession of money and crystal meth.

A leader of a local vigilante group fighting against the gang told a local radio station that residents were aware the Knights Templar were involved in organ trafficking since several children had been rescued, including some who were kidnapped and held in a refrigerated container inside a van.

“They were inside a refrigerated box, tightly wrapped in blankets,” Jose Manuel Mireles, leader of the civilian “self-defence” group in Tepalcatepec, said.

Mireles said the children’s parents had allowed them to go on an outing to the beach when they were kidnapped. “They were all children from the same Mexico city school,” he said.

Mexican authorities have said drug trafficking is no longer the main source of income for the Knights Templar, with the gang’s main sources of income being illegal mining, logging and extortion.