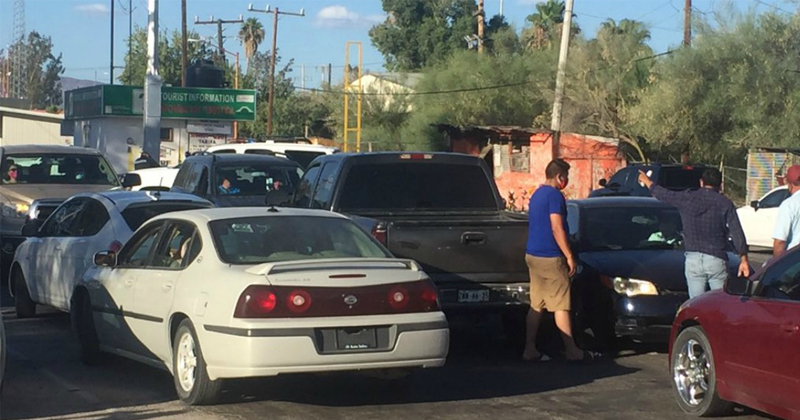 In the last four days, 15 states have reported record increases in new coronavirus cases, resulting in at least 40% of the U.S. pausing or reversing reopenings.

Cases are particularly surging in Arizona, California, Florida, and Texas, as the world watches in disbelief.

The international community is alarmed about the major upswing in infections, with European officials maintaining the US traveler ban and now even America’s southern neighbor is putting up walls…

Officials in Sonora, Mexico moved quickly to slam the border shut before the start of the July Fourth weekend, traditionally a peak tourism time as Americans flock south to celebrate, the Arizona Daily Star reported.

Officials have not announced a reopening date.

Additionally, residents of Sonoyta, the Mexican border town near Lukeville, Arizona, erected a blockade of vehicles at the border this past holiday weekend to prevent Americans from entering the country, reported Newsweek.

The blockade included a line of vehicles on the Mexican side that prevented Americans from entering.


Arzate said Americans should only be permitted in “for essential activities, and for that reason, the checkpoint and inspection point a few meters from the Sonoyta-Lukeville AZ crossing will continue operating.”

Arizona reported 3,536 coronavirus cases Sunday. The state has confirmed 98,000 cases so far, with 1,809 virus-related deaths. The latest surge in cases is due to the state’s decision to resume business as usual, especially around Memorial Day weekend.

A posting in a Facebook group titled “Sonoyta Unido Jamás Será Vencido,” or “United Sonoyta Will Never Be Defeated,” said, “Tomorrow [Monday] border closure again. Respect for the people and for the people. 6 am-8 pm.”

A demonstrator told News Telemundo the reason for the blockade is that Sonoyta doesn’t have the proper medical facilities to handle a pandemic:

Mexico and the U.S. have previously agreed on border crossing limits for essential activities only. The U.S. extended travel restrictions on the border through mid-July.

This isn’t the first time Mexican residents have constructed a blockade to keep Americans out during the pandemic. Residents in Nogales, Sonora, created roadblocks to prevent Arizonans from entering the country in May.

The virus pandemic is also hitting Mexico, more than 256,000 confirmed cases, and 30,600 deaths had been reported.