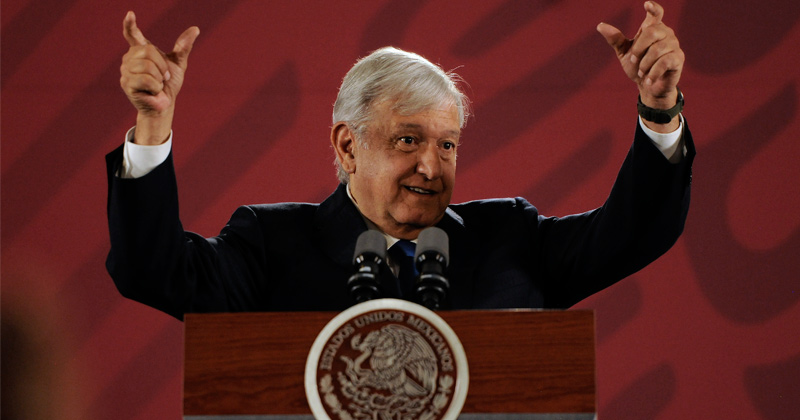 “The government is corrupt, because the wrong people are in charge. Once López Obrador wins the presidency, everything will be different. The state will give us great education and healthcare services, for free! The rich will pay their taxes and poor people will get the welfare programs they need to escape poverty.”

That’s what one of my friends told me, with an almost religious level of devotion, and she wasn’t the only one. A couple of years ago left-winger Andrés Manuel López Obrador managed to imprint this utopia in the minds of his followers. He was so successful that he won the 2018 presidential elections by a landslide, collecting 53 percent of the vote (the largest margin since 1982), and propelled his political alliance to a comfortable majority in both chambers of the Congress of the Union and most of the state legislatures. This was remarkable considering that most of the candidates of his party were perfect nobodies who won specifically because of Obrador’s endorsement.

At the core of his movement, there was the fantasy of a perfect government, one led by honest and “patriotic” people, that would end corruption, multiply welfare programs, and correct the injustices of “neoliberalism.” During his campaign, Obrador would go on TV shows and promise that from the first day of his government criminals would change their ways and become honest people. He would answer every question about the problems of the country with a one-size-fits-all solution: fight government corruption and give out more welfare.

And the people ate it up. More than 30 million citizens voted for López Obrador in 2018, and surprisingly he even had above-average support from the rich and the college educated. Why?

The reason is far more worrisome than it seems. In Mexico, the fantasy of a perfect government is deeply ingrained in the minds of the majority of the people: whether they’re conservatives or liberals, they long for an all-good and all-powerful leader who will erase the problems and bring justice to the land. So, every time state intervention proves to be a disaster, people take refuge in the idea that the problem was that the “wrong people” had the power. “But once OUR guy is in charge,” they say, “everything will be different.”

All López Obrador did was take this fantasy, perfect it, and turn it into the language of a well-oiled electoral machine: he built an alliance with old politicians of the PRI (Institutional Revolutionary Party/Partido Revolucionario Institucional), evangelical leaders, unions, singers, and intellectuals. Then he rode to a resounding victory. So, next exit: utopia, right?

There’s one teensy, weensy, but ever-so-crucial little detail: fantasies, like those cruel mirages that haunt the lost travelers in the middle of the desert, evaporate as soon as you reach out your hand and try to touch them. And they turn into dust.

So far, López Obrador’s administration has been sixteen months of the slow-motion vanishing of that fantasy. He promised that Mexico’s economy would grow by 4 percent in 2019. Instead, it fell 0.1 percent despite becoming the United States’s the biggest trade partner. He promised to fight crime “with hugs, not with bullets,” but 2019 was the most violent year in Mexico’s modern history, with 34,582 murders. He promised to rescue Pemex (Mexican Petroleum/Petróleos Mexicanos), but the state-owned oil company doubled its losses in 2019 and is closer than ever to bankruptcy. He promised free medical attention, but public hospitals have experienced chronic drug shortages for diseases such as cancer and HIV. He promised to sell the presidential airplane, but now he will raffle it in a lottery with money prizes, having found out that he can’t give it away because the Mexican government acquired it on a leasing contract with Banobras (National Bank of Public Works and Services/Banco Nacional de Obras y Servicios Públicos).

As the weeks pass by, the incompetence becomes ever more evident, and hope turns into disappointment. A host of polls published in the early days of march show the same picture: Obrador’s popularity is bleeding. He has lost around 20 percentage points and all but his most ardent supporters begin to question his actions in the presidency. Meanwhile, he’s pushing at full speed a political agenda designed to give more power to the office of the president and build welfare networks to mobilize his voters and keep the legislative majority in the upcoming midterm elections of 2021. This is the bad news.

The worse news is that even most of those who have turned against Obrador keep clinging to the fantasy of the perfect government. You hear it over and over in the opposition gatherings: “Just wait until OUR guy is in charge, he will change things for good.” So there’s a real risk that if Obrador’s party collapses a more interventionist leader will pick up the pieces and begin the cycle all over again, as has been happening since colonial days.

So, why—even with proof of its failure right before their eyes—do people refuse to let that fantasy go?

Just maybe it is because they fear the pain. It is painful to give up the illusion of a benign tyrant who will save us from ourselves and transform the land into green and gold. To do means to acknowledge that no wizard can solve our problems with a wave of the legislative wand. It means that we must solve them through voluntary cooperation and face the uncertainty of the future to find the opportunities that will take us to a better life. It means to become adults—and many people just don’t want to.