Repeats jibe about Paul being anti-semitic 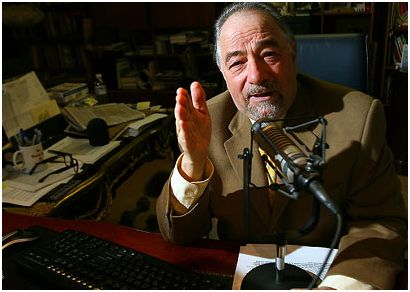 In an exchange with a patriotic Ron Paul supporter on his show this week, Savage once again set about convincing his listeners that Ron Paul is wholly unelectable and, worse still, is a danger to the security of the US.

“Michael, it won’t make any difference if Obama wins or not, because all the Republican candidates are the same. And you know the only candidate, the “deranged” Ron Paul, is the only one who has spoken out against, not only NDAA, but SOPA, Stop Online Piracy Act . . . he spoke out against the Patriot Act years ago.” the caller stated.

“He’s the only one warning about the fascism and oppression coming to America. And he’s been right.” she added.

“Hold on. He is right, but he’s not electable.” Savage bizarrely interjected, before going on to slam Paul once again.

“Ma’am. Ma’am. Stop. You sound like you are hysterical. You sound just like Ron Paul. Why are all the Ron Paul addicts so hysterical (I’d like to know)?” Savage said as the caller urged him to “support the candidate that supports the constitution.”

“None of the Republican candidates have spoken out against NDAA, except for Ron Paul.” the caller once again urged.

“Ok. On this point you are correct.” Savage conceded, “But this still does not make the crackpot electable.” he added.

“He’s not a crackpot, Michael. He’s been saying things that you agree with.” the caller interjected.

“Really. He’s being saying things that I agree with? You mean I agree that Israel should be annihilated and disappeared off the planet like he does?…You want me to play the sound bite?” Savage said, before launching into a debate about Israel.

When the discussion came back around to Ron Paul, the caller told Savage that she had voted for George McGovern because he was anti-war, prompting him to state “So you’re confirming what I suspect. Most people who support Ron Paul are dyed-in-the-wool liberals.”

Listen to the clip below:

Recently Savage has taken to trashing Paul on his radio show, going so far as to label the Congressman a “lunatic” who is a threat to the survival of the United States.

With an audience of well over 9 million people, Savage is bent on not only portraying Ron Paul as a political fringe kook, but also a racist. Following recent comments made by Paul that in his eyes the Gaza Strip is a concentration camp, Savage labeled the Congressman an anti semite who hates Israel and supports Hamas and Hezbollah.

For the record, Ron Paul has never said he believes Israel should be “annihilated”, neither has he expressed anti-semitic sentiments. All Paul has said about Israel is that he does not believe the US should be interjecting militarily in the middle east on Israel’s behalf or supplying foreign aid to Israel. Paul has also expressed sympathy with the plight of the Palestinian people, yet somehow Savage has translated this into the notion that the Congressman supports the actions of anti-Israeli terrorists.

Savage claimed that there is little difference between Paul and “the psychotic, progressive leftists” who support Obama. “If Obama’s team wanted to invent someone else on the other side to make Obama look mild and moderate and safe, they couldn’t have done better than inventing Ron Paul,” he said.

Of course, Savage is a huge hypocrite in this respect because as little as five months ago he was singing Ron Paul’s praises for both his take on the illegality of the supposed al-Awlaki assassination, and for his principled stand on the federal budget and government spending.

Furthermore, Savage has expressed support for Mitt Romney, the foremost big government candidate, who supported the banker bailouts, as well as a fervent advocate of socialized healthcare.

Over recent years, Savage has set about convincing his listeners that he is now railing against both establishment political parties and that he is really an independent. However, it is clear where he really stands with his show of support for Romney and his trashing of Ron Paul, the anti-establishment candidate.