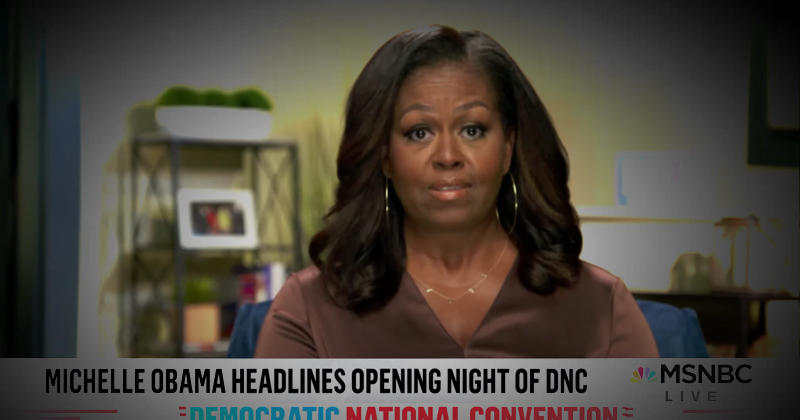 During her keynote speech, Obama came hard at President Trump claiming only a Biden victory could prevent things from going from bad to worse.

Is Michelle Obama threatening us? pic.twitter.com/Ff57h4Tiwk

“If you take one thing from my words tonight it is this: If you think things cannot possibly get worse, trust me, they can and they will if we don’t make a change in this election.”

“If we have any hope of ending this chaos, we have got to vote for Joe Biden like our lives depend on it.”

Her statement was widely interpreted as a threat possibly alluding to Democrats holding the country hostage with more BLM/Antifa riots, or with more stringent COVID-19 lockdown measures, which are largely blamed for destroying the economy and deteriorating public mental health.

Sounded like if they didn't win, America's destruction will continue. Not from Trump, but from them.

Rhetorical question. Once a "community organizer", always one. This is a subtle condoning of violence to the sheeple, without expressly stating it. Same as Pelosi shrugging her shoulders when asked about the violence.

I did not watch the DNC, but did see clip. I took it to mean essentially if you want the riots to continue on a larger scale, re-elect Trump.

Others thought they saw desperation in her eyes, with some claiming she’s trying to get out ahead of prosecutions soon to be forthcoming against the Obama administration for its illegal spying on then-candidate Trump’s campaign.

I read between the lines and see a worried face trying to get her baby daddy out of hot water. Durham is getting their attention HARD.

She is crapping her pants… tick tock.

View the clip with context below, or rewind to see the full speech: