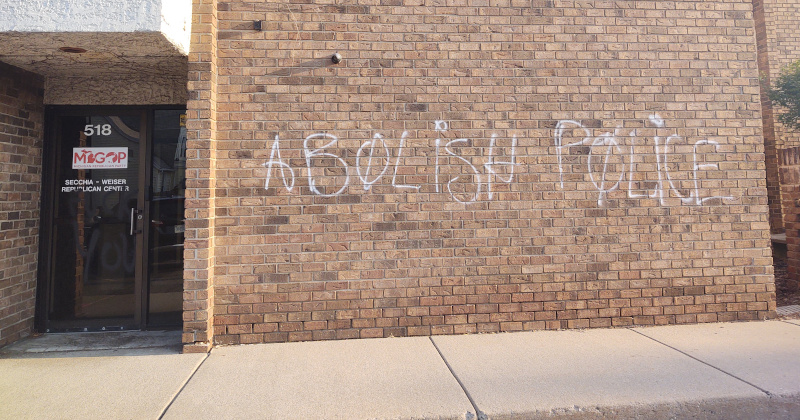 The Michigan Republican Party said its headquarters in the city of Lansing was vandalised with “radical anti-police statements,” posting photos of graffiti on the walls of the buildings that say “f**k police,” “f**k you,” “abolish the police” and more.

A party tweet stated that “we will not be intimidated,” promising to continue to work so that the incumbent US President Donald Trump is re-elected.

“Sunday night our building was vandalized with radical anti-police statements,” the Michigan GOP tweeted Monday. “We will not be intimidated, and we will continue to work hard to ensure President @realDonaldTrump is re-elected!”

Sunday night our building was vandalized with radical anti-police statements. We will not be intimidated, and we will continue to work hard to ensure President @realDonaldTrump is re-elected!#LeadRight #MITV20 pic.twitter.com/r56biu3oWj

While the party said that it filed a report with the Lansing Police Department, it is not known who is responsible for defacing the building.

According to a party statement, one of the tags said “f**k ICE” referring to the Immigration and Customs Enforcement agency where the state’s GOP chair, Laura Cox, was employed as an agent.

Cox, commenting on the situation, called the vandalism “emblematic of the chaos sweeping through our nation’s Democrat-run cities”.

“The Michigan Republican Party is proud to stand by the men and women of law enforcement, and I am incredibly proud of my service with the Immigration and Customs Enforcement agency,” Cox stated. “This vandalism is emblematic of the chaos sweeping through our nation’s Democrat-run cities, as the radical left uses criminal tactics to try and extort weak politicians into defunding the men and woman who keep us safe. Republicans will not be intimidated. President Trump will not be intimidated. And this November, the American people will show the world they will not be intimidated when they reelect President Donald Trump.”

Michigan is considered a swing state in the upcoming US presidential election, as Republicans and the incumbent US president, Donald Trump, characterize “the Radical Left” for supporting the defunding of police in favor of added social services to residents.

Trump has suggested that his political rival, Joe Biden, is also a member of the so-called Radical Left, although the Democratic candidate has stated that he supports the police.

Calls to shift funding away from US police departments have come from some activists involved in protests against police brutality and racism that have spanned the United States for months following the killing of George Floyd while in police custody in late May.