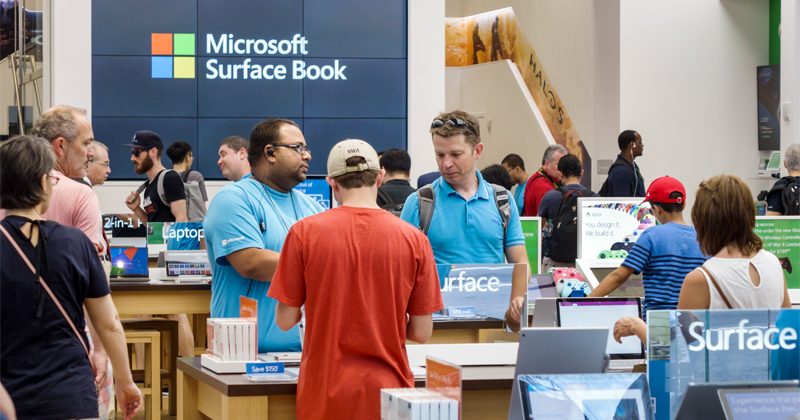 The company opened its first store in 2009, hoping to attract customers the same way that its rival Apple did.

Since then, more than a hundred stores have been opened in the United States and 10 around the world. However, they did not enjoy the same popularity as Steve Jobs’ company.

Microsoft said it would permanently close all its retail stores around the world, leaving only four locations in New York, London, Sydney, and Redmond, which the company said will be “reimagined”. “Our sales have grown online as our product portfolio has evolved to largely digital offerings, and our talented team has proven success serving customers beyond any physical location. We are grateful to our Microsoft Store customers and we look forward to continuing to serve them online and with our retail sales team at Microsoft corporate locations”, Microsoft Corporate Vice President David Porter said in a statement.

The company said that the staff currently working in retail stores will be offered new jobs and “serve consumers, small-business, education, and enterprise customers, while building a pipeline of talent with transferable skills”.

Microsoft initially planned this move for next year, but the process was accelerated by the coronavirus pandemic, The Verge reported, citing an anonymous source with knowledge of Microsoft’s retail operations.

In a blog post in April, the company spoke about how retail stores had transformed their work following the introduction of safety measures to curb the spread of the coronavirus, which resulted in the closure of all non-essential shops. Announcing its decision to close its stores, the company spoke about how it managed to provide necessary services amid the pandemic.

“Since the Microsoft Store locations closed in late March due to the COVID-19 pandemic, the retail team has helped small businesses and education customers digitally transform; virtually trained hundreds of thousands of enterprise and education customers on remote work and learning software; and helped customers with support calls”, the company said in a statement.

The news has received mixed reactions from netizens, with some saying that they were upset by the company’s decision and that they received better customer support in the stores than online.

That’s majorly annoying. The store was always better to deal with if my Surface had a problem rather than going through online customer service.


Noooooooooooooo!!!!!!!! I absolutely loved the Microsoft store. Employees were super helpful and it was always a nice experience. #Microsoft #Xbox


Others contended that the decision was rational and noted that the company had failed to compete with Apple’s stores.

That's fine. Majority of people buys their stuff online anyway ( yes Chad, we know YOU want to touch the product before purchase. You're the minority ).


The reasoning behind those retail stores seemed to be: we want to be Apple.


Still, others were surprised to learn that these stores even existed.

I didnt even know they had retail stores