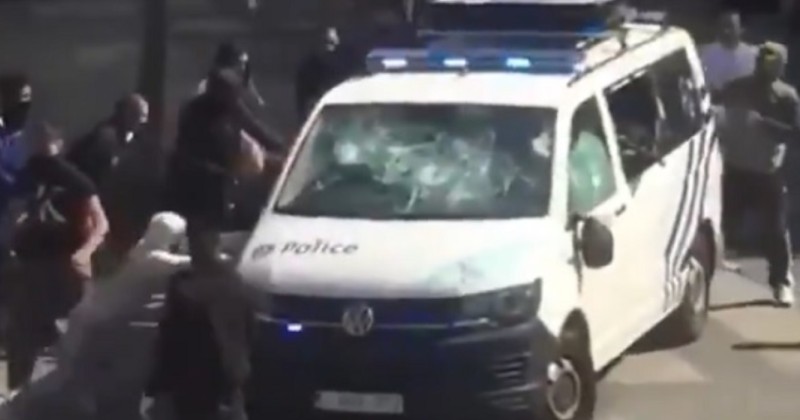 Migrant-background youths staged a riot in Anderlecht, Belgium during which they trashed police vehicles and fired guns despite the city being under a coronavirus lockdown.

The unrest was triggered by an incident in which a 19-year-old identified as ‘Adil’ killed himself by colliding with a police van after running through a checkpoint on his scooter.

This prompted calls for a “protest” which quickly turned into a violent riot as the youths smashed up the police vehicle using bricks and concrete slabs.

An individual wearing a balaclava subsequently fired a handgun that had been stolen from police.

“There was a new spike in violence, a more limited one, around 10 p.m., with stones thrown at a police station (windows were broken), but this was rapidly repressed by police, said local mayor Fabien Cumps.

Cumps said the mob had gathered not to pay respect to their dead friend but in order “to be violent.”

Police chief Patrick Evenepoel admitted that authorities didn’t initially intervene despite the illegal gathering and only acted “when we saw that groups of young people were arming themselves with rocks taken from construction sites in the area.”

All of this was in complete violation of Belgium’s coronavirus lockdown law, which bans gatherings of more than two people.

Twitter users pointed out the difference between the police’s approach to the initial gathering and them fining people for walking in the park.

There was a lightning-fast response on Belgian social media to the Anderlecht riots, with memes pointing at criminals paying zero for destroying police vans, while law-abiding citizens walking in the park get fined for breaking COVID-19 restrictions. pic.twitter.com/sGv0k4v0Ol

As we previously highlighted, lockdown laws are being ignored in numerous migrant ghettos across Europe.

The lockdowns are deemed so pointless that one French official even suggested opening up all the shops in migrant areas to prevent riots.