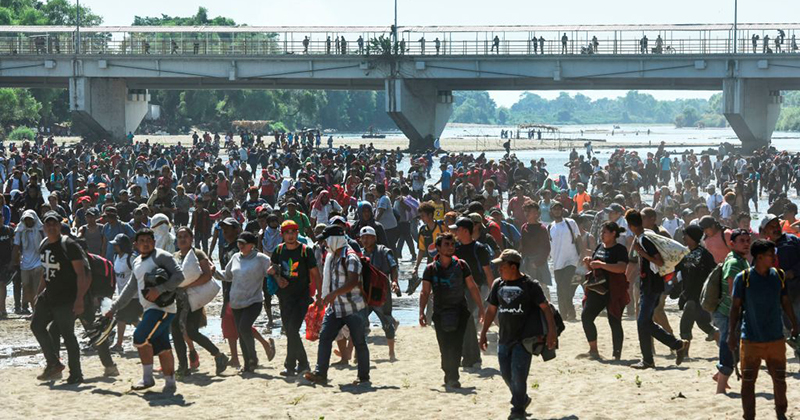 Migrants in central America say they are waiting for President Trump to be voted out of office and for Democrats to reopen the borders so they can cross illegally into the US without the fear that authorities will ‘throw them back.’

The Center for Immigration Studies reports that many migrants are sitting in wait in Mexico, praying for a Trump defeat.

U.S.-bound migrants stuck in Mexico say they're staying, calculating a Trump 2020 election loss and Dems will reopen the southern border. "The Trump-defeat gambit offers powerful motive, a 50-50 chance that the U.S. border will clear in less than a year."https://t.co/jQmPyUEclo pic.twitter.com/9d90U1Fdwe

“I’ll wait for that because it would make things easier to get in.” Honduran Katherine Cabrera told researchers, adding “I want Trump out!”

Another told CIS that many are not attempting to illegally gain entry to the country “until Trump leaves,” because the prevailing expectation is that “right now, the Americans will throw you back” to Mexico.

“A lot of people in El Salvador believe he (Trump) is the reason all this is happening, that he is selfish and cruel and doing everything he can to make us suffer,” another migrant commented, adding “But once Trump is defeated and the Democrats take over, things are going to get better.”

Other groups of migrants are attempting to cross in greater numbers, believing that it will give them a better chance of evading capture:

A migrant Caravan from Guatemala gathered near the Mexican border on Sunday, waiting for more migrants to arrive in hopes that greater numbers may give them a better chance in their attempt to cross into Mexico. pic.twitter.com/elxYkDqOMO

On Monday, Thousands of migrants stormed a bridge over the Suchiate River from Guatemala to Mexico, attempting and failing to move further north.

The scenes were chaotic with Mexican National Guard troops confronting the migrants:

The CIS reports that apprehensions of illegal crossers are down from about 144,000 last May to 40,000 in December, owing to new reinforcements on the US side of the border, and the asylum agreement made by the US government with Mexican authorities that allows migrants to wait in Mexico.

Further reports suggest that President Trump wants to divert billions in funding to the border wall:

Meanwhile, Democratic Presidential candidate Joe Biden, the “moderate” opposition to Trump, declared Monday that he will seek to end all illegal immigration detention “across the board”.

Joe Biden: end all illegal immigration detention “across the board” pic.twitter.com/YkwHiNJYcC