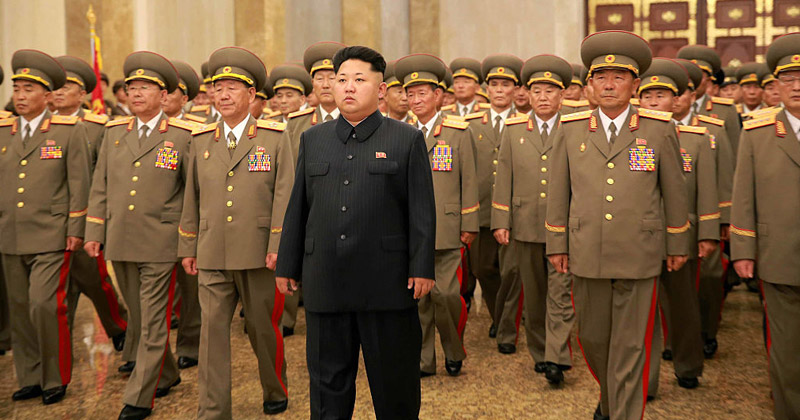 The top Trump aide, who asked not to be named, spoke with reporters while senators met at the White House for what has been described as an “unusual” classified briefing on North Korea’s nuclear ambitions.

“What you see is a really an integrated effort to prioritize diplomatic and informational aspects of national power, but also what you’ll see soon is using the economic dimension of national power as well as the military preparations that are underway,” the official said.

When asked to expand on the administration’s military preparations, the senior official remained tight-lipped, asserting only that a “broad range of options” are being analyzed for the North Korean “threat.”

“I don’t think we’re going to describe those in any detail,” the Trump aide said.

The administration official highlighted further cooperation with U.S. allies Japan and South Korea as well as attempts to push China to further cut off the regime.

Other options, such as multinational sanctions and putting North Korea back on the list of state sponsors of terrorism, have also been introduced as of late.

“Past efforts have failed to halt North Korea’s unlawful weapons programs and nuclear and ballistic missile tests,” the statement said. “With each provocation, North Korea jeopardizes stability in Northeast Asia and poses a growing threat to our allies and the U.S. homeland.”

“The United States seeks stability and the peaceful denuclearization of the Korean peninsula. We remain open to negotiations towards that goal. However, we remain prepared to defend ourselves and our allies.”

As noted by the Daily News, Sen. Chris Coons (D-Del.), a member of the Senate Foreign Relations Committee, alleged preemptive strikes were not brought up during the briefing. Sen. Coons praised the presence of the USS Carl Vinson aircraft carrier in the region and the recent deployment of the THAAD missile defense system in South Korea.

“The level of the threat here is significant and real,” Sen. Coons said. “I’m comfortable that the forward deployment of increased American assets is an appropriate piece of a strategy that makes military preparedness secondary to diplomacy, but I don’t think our diplomacy won’t be successful unless it’s clear that we’re very serious.”

Adm. Harry Harris, the chief of U.S. Pacific Command, told the House Armed Services Committee Wednesday that a defensive radar and anti-ballistic missile systems are now needed in Hawaii due to the North Korean threat.

“Kim Jong-Un is clearly in a position to threaten Hawaii today, in my opinion,” Adm. Harris said. “I have suggested that we consider putting interceptors in Hawaii that… defend (it) directly, and that we look at a defensive Hawaii radar.”