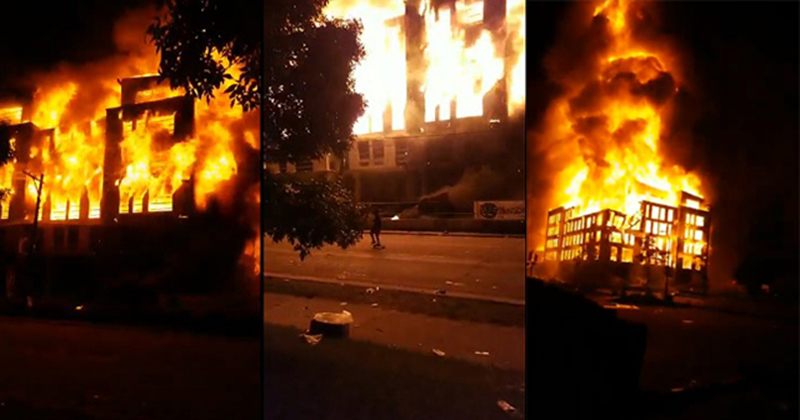 A housing complex under construction in Minneapolis was burned to the ground in spectacular fashion during the Black Lives Matter riot on Wednesday night.

Watch the full video from AlphaNewsMN:

Journalists from the Star Tribune appear to have gotten footage of the fire shortly after it was first set:

Fire starting near construction site. This is not good at all. pic.twitter.com/Kqh9BiYrZw

This unfinished building is in danger of catching fire. pic.twitter.com/59BaIfEd33

Large apartment building under construction on Minnehaha about to go up on flames. pic.twitter.com/nu02afpsnC

Housing complex construction site on 29th/26th is on the verge of collapse. Heat is so intense you can feel blocks away. pic.twitter.com/sXbmQyzHCz

This building is burning to the ground in Minneapolis. The whole block is on fire. There are homes nearby. Looting is still on-going. #BlackLivesMatter #GeorgeFloyd #antifa pic.twitter.com/dc75bAt48s

Tons of other buildings were similarly set ablaze and looted.

WATCH: A massive fire near Lake Street and 26th Avenue South in Minneapolis engulfs a building, as neighbors frantically hose down nearby houses. #GeorgeFloyd 📷 : @MDVancleave pic.twitter.com/Cy882xpzVk

Firefighters were attacked earlier in the night by rioters while responding to fires at an AutoZone.

The AutoZone building also later went up in flames.

The fire at AutoZone seems to have started back up; there are least five separate fires going, of varying sizes. pic.twitter.com/rTuzaG6g6k

Unreal. AutoZone is completely engulfed. You can hear accelerants exploding from the heat inside. pic.twitter.com/MIlcydQPYJ

Check AlphaNewsNM for the best livestreams of the night.