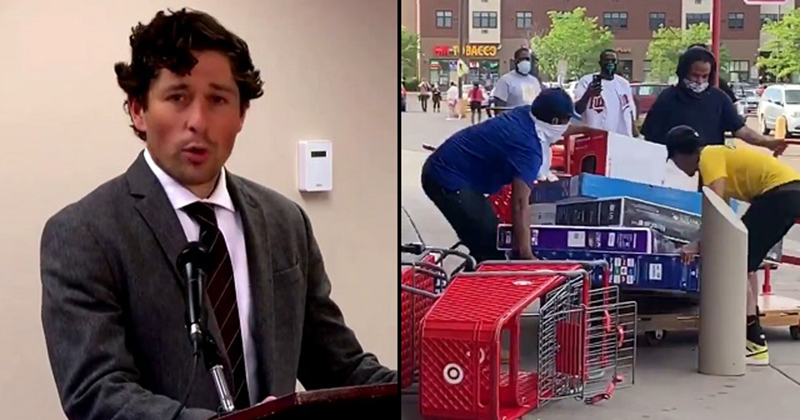 Minneapolis Mayor Jacob Frey (D) on Thursday appeared to justify the riots in his city by claiming the anger shown was “not just because of five minutes of horror, but 400 years.”

While making the statement, Frey also acted like he was crying:

Minneapolis Mayor Jacob Frey choked back tears on Thursday and told protesters who were decrying the police-involved death of George Floyd that their anger was “not only understandable, it’s right.”

The mayor’s eyes appeared red from tears as, just a few miles away, firefighters were still dousing flames from protests that turned violent overnight, demonstrations that erupted after Floyd’s death in police custody on Monday.

“What we’ve seen over the last two days … is the result of so much built-up anger and sadness,” he told reporters. “Anger and sadness that has been ingrained in our black community, not just because of five minutes of horror, but 400 years.”

Alex Jones exposes the racial division rhetoric being ramped up in the wake of the senseless murder of George Floyd by an out-of-control cop.

I guess the big screen TVs we saw looted were a form of reparations?

This will sure make the police treat them with more respect. 🤡 pic.twitter.com/jSxtfAM9c4

Incidentally, NBC News failed to mention that firefighters were attacked on Wednesday night when they moved in to try and start putting out some of the 30 or so fires set by rioters.

A six-story, 190-unit $30 million affordable housing project under construction in Minneapolis was one of the buildings that was burned to the ground.

“Until we name this virus, this disease that has infected America for the past 400 years, we will never, ever resolve this issue,” Jenkins said.

“I am asking my colleagues … to declare a state of emergency declaring racism as a public health issue. Until we name this virus, this disease that has infected America for the past 400 years, we will never, ever resolve this issue." pic.twitter.com/2MIz8IDOGm

As I reported last night, Rep. Ilhan Omar (D-MN) put out a similar statement to Frey’s, tweeting that “our anger is just” and “our anger is warranted.”