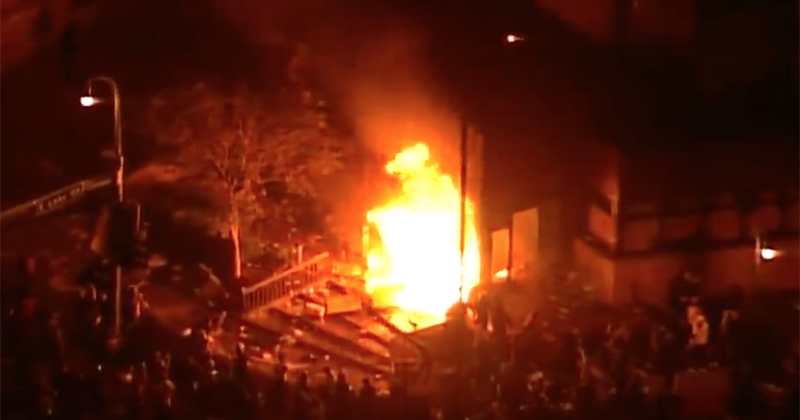 Welcome to the New America™.

BREAKING: The third precinct police station is on fire. Rioters have taken over pic.twitter.com/AJg4jDr9Tz

The third precinct goes up in flames on the third night of riots.

Savanah and Tom react to the Minneapolis and LA riots.

This is the moment when Minneapolis police officers abandoned the 3rd precinct building. Rioters chased them as they left and continued to throw objects at the police vehicles. pic.twitter.com/KoxAAYiUIN

Firefighters are stationed nearby but aren’t coming into the protest zone. pic.twitter.com/aRDapYSy51

No police in sight pic.twitter.com/baiDgxktNi

MSNBC reporter says “I want to be clear on how I characterize this. This is mostly a protest. It is not generally speaking unruly."

As a building burns in the background…
pic.twitter.com/KGrtpPsF3E

BREAKING: 3rd Police Precinct in Minneapolis Has Been Breached & Set on Fire; All Officers Have Evacuated The Area

Firefighters not attempting to put out blaze

The fire at the MPD’s 3rd Precinct was only at one corner 5 minutes ago. It’s now spread across the entire building. With no firefighters on scene… that building will likely be destroyed tonight. pic.twitter.com/t6p3Yv1KYV

We're hearing unconfirmed reports that gas lines to the Third Precinct have been cut and other explosive materials are in the building.

If you are near the building, for your safety, PLEASE RETREAT in the event the building explodes.

Trump said he’s going to send in the National Guard because “these THUGS are dishonoring the memory of George Floyd, and I won’t let that happen.”

I wonder if Kushner fed him that line.

I can’t stand back & watch this happen to a great American City, Minneapolis. A total lack of leadership. Either the very weak Radical Left Mayor, Jacob Frey, get his act together and bring the City under control, or I will send in the National Guard & get the job done right…..

….These THUGS are dishonoring the memory of George Floyd, and I won’t let that happen. Just spoke to Governor Tim Walz and told him that the Military is with him all the way. Any difficulty and we will assume control but, when the looting starts, the shooting starts. Thank you!

On the flip side, I’m sure that “when the looting starts, the shooting starts” was all Trump!

It appears the Nation Guard is on the scene.

Multiple Humvees probably from the Minneapolis-Saint Paul Air Station are headed to the 3rd Precinct. Video from Snap Map. pic.twitter.com/IeVlvfb0zW

#NationalGuard is in Minneapolis and moving towards the police station on fire pic.twitter.com/DzSCM2OiyT

This is total pandemonium.

Amidst all this, police are being called to investigate a possible kidnapping from the parking lot across the street from their burning station; a screaming woman was said to have been forcibly put into a vehicle that then sped away, according to scanner traffic.

Priority 1 calls piling up: in the past few minutes, a gunshot victim walked into HCMC, squads were dispatched to break up fights between looters and business owners near N. 42nd/Lyndale, and a group armed with guns and knives is trying to burglarize a corner store at 19th/3rd.

Similar riots are breaking out throughout the country:

Seeing a lot of reporters sharing a video of shots being fired in Louisville, claiming it was all a "peaceful protest."

So here's the full video.

They were trying to flip a police transport truck before shots were fired and we have no idea where the shots came from. pic.twitter.com/x0FJyqxm91

The Ohio Statehouse was raided by rioters and the government mobilized SWAT teams to take it back.

WATCH: Columbus protesters targeting the Ohio Statehouse just a little bit ago. State troopers responded from inside & Columbus PD came over from the nearby street. pic.twitter.com/4P7kRNVMv5

NOW: Demonstratirs have moved to the Statehouse grounds and have broken windows. Some have gone inside. @nbc4i pic.twitter.com/VBtVbprA9G

Shots were fired at the Colorado State Capitol in Denver during a Floyd protest:

Downtown denver. Some girl turned around to run this guy over #GeorgeFloyd #icantbreathe #downtowndenver #denver pic.twitter.com/eirohGGPr5

Breaking: 6-7 shots were fired in the direction of the Colorado State Capitol in Denver during a protest against the George Floyd killing. There are no reports of injuries. pic.twitter.com/8Fau1hnGKn

Both lanes of I25 are now blocked by protestors in Denver. pic.twitter.com/6XjnQGNR0d

Denver Police are letting off a bunch more chemical rounds in the direction of protesters across Colfax, even as traffic moves through the intersection. An RTD bus driver paused, then drove right through. #9News pic.twitter.com/0JGNArnRgp