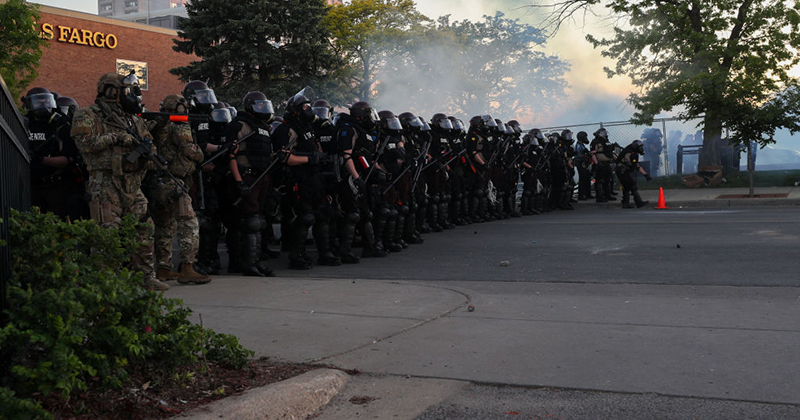 Looting and arson have followed what began as peaceful protests in response to the apparent killing of George Floyd by Derek Chauvin, a now-former member of the Minneapolis Police Department.

But whatever was the spark that set off the current round of rioting in the Twin Cities area, it is clear that most property owners and residents will have to fend for themselves where riots have taken place.

In other words, any unfortunate shopkeeper or resident who finds himself in the path of the rioters ought to just assume that police won’t be around to provide any protection from the mob.

Action 7 documents the violent protests that have hit Austin, TX in response to the death of George Floyd.

For example, The Minneapolis Star-Tribune reports:

The police station on E. Lake Street has been the epicenter of protests this week… Nearby, Minnehaha Lake Wine & Spirits, the target of looters the night before, also was set ablaze. …On Wednesday night, a man was fatally shot and crowds looted and burned buildings on E. Lake Street late into the night.

Earlier in the day, in St. Paul, looters broke windows, stormed through battered-down doors and snatched clothes, phones, shoes and other merchandise from shops along University Avenue near the intersection of Pascal Street. Officers formed a barricade in front of Target. But police were absent a block away at T.J. Maxx, where looters smashed down the door and fled with heaps of clothing piled on shopping carts.

Many business owners who now face destruction at the hands of rioters can scarcely afford it:

Many of the shops destroyed along this stretch of E. Lake Street are immigrant-owned businesses — many of which were already struggling during the coronavirus pandemic. “Now it’s worse,” said Roberto Hernandez, who stood guard outside his nutrition store for five hours to fend off looters. (emphasis added)

Another man, who was working to open a sports bar in the area later this year, saw his bar destroyed. Needless to say, with only a few exceptions, the police weren’t around to “protect and serve.”

Admittedly, in cases like this week’s riots, the police are heavily outnumbered and unable to provide any sort of general protection from rioters. Even if individual officers were engaging in heroic behavior to turn rioters away from potential victims, there would be little they could do to confront all offenders.

But heroics or not, the outcome for victims is the same: they must rely on self defense, formal private security, or private armed volunteers likely to be labeled as “vigilantes.”

A failure to protect taxpaying citizens from violence and crime in a wide variety of situations is standard operating procedure for police departments which are under no legal obligation to protect anyone, and where “officer safety” is the number-one priority. The lesson to be learned here is that the alleged “social contract” between citizens and the state is a one-way street: you pay taxes for police “services,” and the police may or may not give you anything in return.

Police Are Not Obligated to Provide Protection

It is now a well-established legal principle in the United States that police officers and police departments are not legally responsible to refusing to intervene in cases where private citizens are in imminent danger or even in the process of being victimized.

The US Supreme Court has made it clear that law enforcement agencies are not required to provide protection to the citizens who are forced to pay for police services, year in and year out.

In cases of civil unrest, of course, be prepared to receive approximately nothing from police in terms of protecting property, or life and limb.

During the 2014 riots that followed the police killing of Michael Brown, for example, shopkeepers were forced to hire private security, and many had to rely on armed volunteers for protection from looters. “There’s no police,” one Ferguson shopkeeper told FoxNews at the time. “We trusted the police to keep it peaceful; they didn’t do their job.”

“Where are the police? Where are the police?” [shopkeeper Chang] Lee whispered over and over from his rooftop perch. Lee would not see law enforcement for three days — only fellow Korean-Americans, who would be photographed by news agencies looking like armed militia…

During the Columbine school shootings in Colorado in 1999, the Sheriff department’s “first responders” formed a perimeter outside the building and refused to enter because the situation was deemed too risky for law enforcement. Meanwhile, children were being slaughtered inside.

Nearly twenty years later, law enforcement officers at the Stoneman Douglas High School in Parkland Florida cowered behind vehicles while students were murdered inside the school.

But even in cases where police are willing to enter the premises and attempt to subdue violent criminals, the victim may find law enforcement officers to be of little help. According to 2008 data from the Bureau of Justice Statistics, police response times to violent-crime-related calls exceeded 11 minutes one-third of the time. Things were no better twelve years earlier in 1996, when a similar survey was conducted. Now, twelve years after 2008, there’s no reason to assume anything has improved.

11 minutes is a long time to wait when dealing with a violent criminal.

Moreover, when police do arrive, don’t expect a competent response. The cases of Atatania Jefferson and Botham Jean provide some helpful reminders.

According to multiple accounts of the Jefferson case, a neighbor of Jefferson called police to “check up” on Jefferson whom the neighbor feared Jefferson might be in danger. Jefferson was soon shot dead in her own living room by law enforcement. The shooter — a now-former cop named Aaron Dean — entered Jefferson’s private property unannounced in the middle of the night. He peered into Jefferson’s windows, and within seconds, the officer had shot Jefferson dead. Jefferson had been playing video games with her nephew.

A year earlier, former police officer Amber Guyger was sentenced to ten years in prison for unlawfully shooting Botham Jean in his own apartment. At the time, Guyger was a police officer returning home from work. She illegally entered the wrong apartment and promptly shot Jean — the unit’s lawful resident — dead.

And, of course, there is the case of Justine Damond, who called the Minneapolis Police Department to report a possible sexual assault near her home. When police arrived, they shot Damond dead, for no known reason other than hysterical fear on the part of police.

Those who proactively attempt to defend themselves fare little better. In 2018, Colorado resident Richard Black used a firearm to defend his grandson against an intruder. Unfortunately, someone called the police. When officers arrived, they opened fire on Black, even though was only a threat to the criminal intruder.

The lesson to be learned from all this is that it is foolhardy, to say the least, to rely on law enforcement officers to intervene to provide “safety” when troubles arise.

After all, experience has shown police are thoroughly unmotivated when it comes to preventing, or even investigating true violent crime. Confronting violent criminals is dangerous and costly. Thus, police departments are geared much more around encouraging harassment of petty offenders (such as George Floyd) and going after small-time drug offenders while confiscating property under asset forfeiture laws.

This provides revenue to pad agency budgets while prioritizing the targeting of easy marks, rather than violent offenders. In the United States, more than half of serious crimes are never solved.

And yet, though it all, we hear again and again the myth that law enforcement agencies will provide protection, retrieve stolen property, and keep the peace. Many people in Minneapolis are now experiencing the reality.