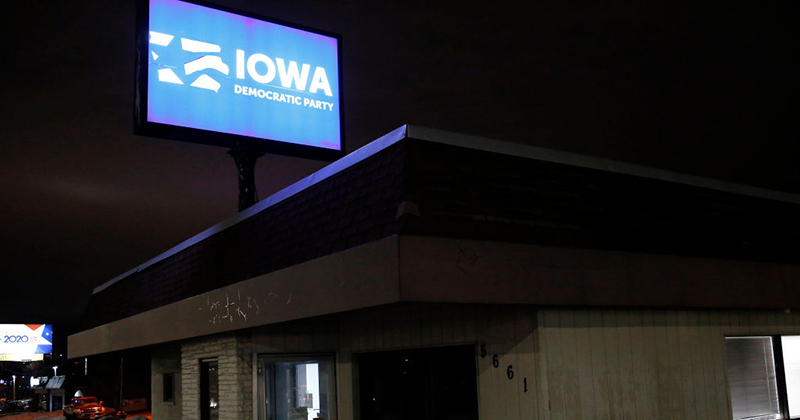 From the DNC Club’s perspective there were three strategic needs surrounding the Iowa caucuses:  (1) Hide the collapse of Joe Biden; (2) Diminish the win by Bernie Sanders; and (3) cover-up a less than enthusiastic voter turnout.


If everything just seemed to collapse, go wrong, and become a mess; and if the end of the night outcomes could be delayed and undetermined; well, in that scenario the objective would be considered ‘mission accomplished‘ on all three points.

Owen reveals the dark hearts that reside on the left as many on twitter are actually celebrating the recent lung cancer diagnosis of Rush Limbaugh.

Despite the media proclaiming Biden was leading the field for the past six months during the impeachment narrative, Joe Biden likely came in fourth or fifth.  He may not have gained any delegates in Iowa.   No-one will pay attention to that now… and few will question how the “media polling” could have gotten it so wrong.   [Tip: they lie]

Simultaneously, Bernie Sanders didn’t stand on stage, declare victory, and receive the praise earned in 2020 that was robbed from him in 2016.  No results means no grand victory and momentum.  Oh, it’ll probably be declared sometime today that Bernie Sanders won, but, meh, doesn’t deliver the same electoral value.  [DNC Club smiling here]

Turnout?  The media have been hyping the Democrats chomping at the bit, drowning in buckets of enthusiastic voters who can’t wait to defeat the orange-man.   This media narrative has been hyped dramatically for well over a year… building…. building…. to the exact moment last night when such incredible turnout would have been visible.  [It wasn’t]

"In terms of turnout…turnout was not quite as high as they expected here…" Katy Tur reporting from a Democratic caucus in Des Moines, IA. pic.twitter.com/W8ApuZp0LD

Instead all the candidates claimed victory with Pete Buttigieg unashamedly standing atop the tallest podium and decrying his campaign won the state of Iowa and he was heading to New Hampshire the most victorious of them all. ….as if, well, as if that was pre-planned.

CTH isn’t going to get into the weeds of the failed reporting Ap that supposedly was behind the Iowa crisis, or the “shadow” tech company that was behind the Ap and directly connected to the Clinton DNC apparatus; which also just happens to have a connection to Buttigieg.   That part doesn’t matter now; done is done.  How the Club did it is less important than everyone understanding what took place wasn’t an organic accident.

Factually this ‘conspiracy theory‘ stuff is so predictable now, even the most die-hard ostriches don’t try to defend it any longer.  However, the hubris behind it is rather remarkable.

Joe Biden’s campaign is organized Astroturf, but he needs to keep up appearances.  Warren and Buttigieg are inauthentic posers, but they need to hang around to pick up Biden’s supporters and keep Bernie in check.  Meanwhile the DNC boardroom will do whatever is needed to try and forestall Sanders, and defend against a hostile takeover.

It’s going to get uglier.

Bernie supporters are eyes-wide-open.  The DNC is playing with unstable explosives now.

…I’m afraid we can’t let you do that Bernie”…