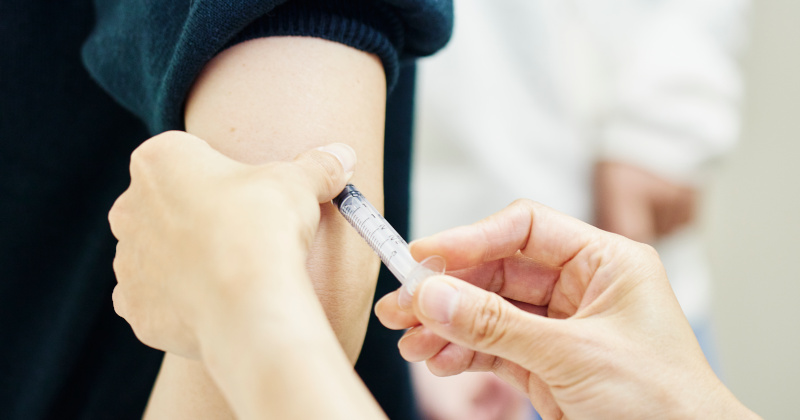 MIT researchers have struck on a novel, and for many surely unsettling, method of keeping track of who has and hasn’t had a particular vaccination – creating an ink that can be safely embedded in the skin alongside the vaccine itself, and only visible using a special infra-red application.

The invisible “tattoo” is a pattern made up of tiny semiconducting crystals that reflect light and thus glows under infra-red light. The pattern will be delivered alongside the vaccine into the skin via hi-tech dissolvable microneedles made of a mixture of polymers and sugar.

“In areas where paper vaccination cards are often lost or do not exist at all, and electronic databases are unheard of, this technology could enable the rapid and anonymous detection of patient vaccination history to ensure that every child is vaccinated,” MIT researcher Kevin McHugh said in a statement.

Strikingly, the research was funded by the Bill and Melinda Gates Foundation – in fact, the project came about following a direct request from the Microsoft founder himself, who has been personally and somewhat controversially involved in efforts to eradicate polio and measles via vaccinations worldwide.

Bill Gates wants to tattoo vaccine records onto people by injecting a QR code under the skin with "invisible" nanoparticles.

Everyone okay with that?
Because that's not dystopian at all. https://t.co/syE8qMTfxF

The system has been practically trialled by MIT researchers on rats, with the embryonic patterns still detectable nine months after injection – on human cadavers, the patterns outlasted five years of simulated Sun exposure.

The Bill and Melinda Gates Foundation came under intense criticism for a vaccination project in India in 2009.

During the year, several schools for tribal children in Telangana became sites for observation studies for a cervical cancer vaccine, which was administered to thousands of girls aged nine – 15.

In all, 16,000 girls in the district, many of whom stayed in state government-run hostels meant for tribal students – months later, many started falling ill and by 2010 five died.

A standing committee on health and family welfare that investigated the studies in India tabled its report in 2013, finding consent for conducting the studies wasn’t properly secured, in flagrant violation of medical norms – in many cases, children gave ‘fingerprint’ consent for the tests despite having no idea about the nature of the disease or the vaccine.

In others, consent forms were simply not secured at all.