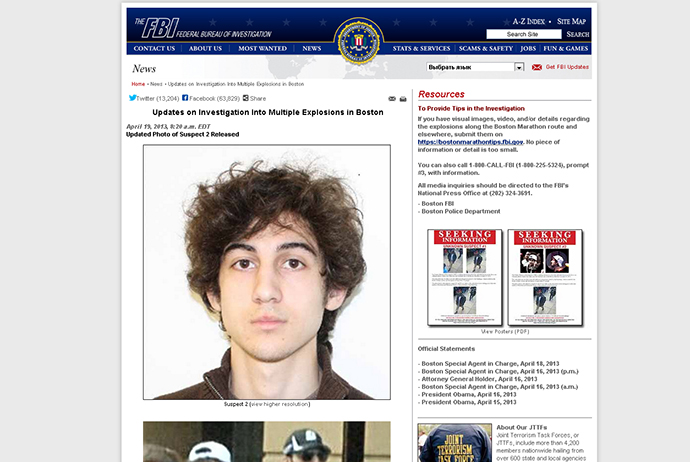 Those of us here in Boston are intimately familiar with the details. We were glued to our television sets, radios, and computers, watching as our city turned into a temporary war zone. At first the events were confusing—conflicting reports and a story line that didn’t make sense. But in the days following the chaotic scene that unfolded in Cambridge and Watertown on the evening of April 18, 2013, just days after the Boston Marathon bombings, a coherent narrative was put forward in local media, largely based on anonymous and government sources.

But new reporting, quoting an MIT police officer, undermines a core FBI claim about what happened that fateful night. Only one of these stories—the FBI’s or the MIT officer’s—can be true.

On the evening of April 18, 2013, the FBI released photographs of the Tsarnaev brothers to the public for the first time. According to the bureau, agents had been sitting on the images for about 36 hours. Even though the Boston FBI office had previously interviewed and monitored Tamerlan Tsarnaev—a two-time New England Golden Gloves boxing champion relatively well known in the area—agents apparently couldn’t remember his name, and so called on the public to help. About five hours after the photographs were released, MIT police officer Sean Collier was shot multiple times at the intersection of Vassar and Main streets in Cambridge. He died that night.

After the FBI released the photographs of their suspects, people who knew the Tsarnaevs called the FBI’s tip line to identify the brothers. And yet, according to the FBI’s narrative, the bureau and the local police did not know the brothers’ names until after Collier’s murder, an alleged carjacking, and a gun battle with police in a quiet, residential neighborhood of the Boston suburb Watertown. More than seven hours passed between the time the FBI released the photographs to the public and the time Tamerlan’s corpse was fingerprinted in the hospital at approximately one am on Friday morning. The FBI claims it only then discovered Tamerlan’s identity.

On its face, that story has never made much sense. Why didn’t agents who interviewed Tamerlan in 2011 remember him in 2013? Why didn’t the FBI put together the information it was receiving through the tip line? Why would the FBI bother releasing the photographs to the public if it didn’t intend to seriously check up on leads it received from Boston area residents? And why, if the FBI says it didn’t know who the brothers were until Tamerlan was dead the following morning, was there a massive FBI surveillance operation happening just blocks from where Officer Sean Collier was killed, on the night of his murder?

Newly reported comments from an MIT police officer suggest the FBI was in fact watching the Tsarnaevs that night in Cambridge.

In an interview with the local NPR station WBUR, MIT police officer Sergeant Clarence Henniger says that the FBI knew who the Tsarnaevs were before Collier was shot. Describing the mood in Cambridge on the evening of April 18, before his colleague was killed, Henniger says [emphasis mine]:

The first public hint about this surveillance operation came in an October 15, 2013 letter from Senator Chuck Grassley, ranking member on the Senate Judiciary Committee, to FBI director James Comey. The Republican Senator asked disturbing questions about the FBI’s knowledge of the Tsarnaevs, including whether the FBI attempted “to use the tactic of ‘recruitment’or a sting operation with Tamerlan Tsarnaev”. Grassley also wrote:

In the hours leading up to the shooting of Massachusetts Institute of Technology (MIT) Police Officer Sean Collier and the death of the older suspect involved in the bombing, sources revealed that uniformed Cambridge Police Department officers encountered multiple teams of FBI employees conducting surveillance in the area of Central Square in Cambridge, Massachusetts.

The Senator asked director Comey to explain what was going on that night in Cambridge.

“Was the FBI conducting surveillance in the area of Central Square in the City of Cambridge on the night MIT Officer Sean Collier was shot dead?

“Was the surveillance being conducted in Cambridge on either of the Tsarnaev brothers, their associates or people later confirmed to be their acquaintances?”

On Friday, October 18, 2013, three days after the Grassley letter was made public, the FBI’s Boston field office issued a joint statement with the heads of the Massachusetts State Police and the Boston Police Department, denying outright that the FBI was watching the Tsarnaevs on the night of April 18. That statement reads in full:

There has been recent reporting relating to whether or not the FBI, Boston Police, Massachusetts State Police or other members of the Joint Terrorism Task Force knew the identities of the bombers before the shootout with the alleged marathon bombing suspects, and were conducting physical surveillance of them on April 18, 2013. These claims have been repeatedly refuted by the FBI, Boston Police, and Massachusetts State Police.

To be absolutely clear: No one was surveilling the Tsarnaevs and they were not identified until after the shootout. Any claims to the contrary are false. [Emphasis theirs.]

The FBI states unequivocally that its agents were not surveiling the Tsarnaev brothers on the night of the 18th, and that its agents were in Cambridge that night “on a matter unrelated to the Tsarnaev brothers.” But this statement doesn’t only contradict MIT officer Henniger’s comments to WBUR. It also contradicts what the FBI told 60 Minutes about bureau operations after the Boston Marathon attacks. According to CBS reporter Scott Pelley, then-FBI director Bob Mueller “ordered every single FBI office in the world”—not just those in Boston, Massachusetts, or the United States—to back up the Boston office’s investigation.

If that’s true, how could the FBI have been running a massive surveillance operation in Cambridge—the home of the alleged Boston bombers, of all places—just days after the bombings if it were related to a completely separate investigation, as the FBI claims? The Boston Marathon attacks were the most devastating terrorist attack to hit the United States since 9/11. Are we to believe that only days later, with the suspects still on the run, the FBI would send agents to Cambridge, Massachusetts to conduct surveillance on a different investigation?

That FBI agents would have been conducting surveillance related to anything other than the Marathon investigation—in Cambridge, just days after the bombing—doesn’t make sense on its face. MIT officer Henniger’s statement suggests the reason it doesn’t make sense is because it’s not true.

Is it possible that Sergeant Clarence Henniger of the MIT police department—the man who found Sean Collier after he had been shot—misremembered what happened that night? Yes. Is it possible that the FBI has been misleading the public about what it knew about the Tsarnaevs, and when? Absolutely.

In the aftermath of the Boston Marathon bombing and the chaotic chase to find the suspects, the FBI has essentially refused to provide detailed information to Congress and its own Department of Justice Inspector General. The bureau says that it mustn’t disclose information that could compromise the Tsarnaev prosecution. But when asked to testify in a closed-door session to the House Homeland Security committee, the FBI also refused. At the same time, its deputy director and the former Special Agent in Charge of the Boston office are perfectly comfortable speaking on national television about the investigation. Apparently the bureau’s concern with shaping public perceptions takes precedence over providing an accurate accounting of events to officials tasked with providing oversight of FBI operations.

In part because the bureau refuses this necessary oversight, we are still waiting for detailed answers to Senator Grassley’s questions. If the FBI was conducting a surveillance operation in Cambridge that night related to another matter, what investigation rose to this supreme level of importance? If the FBI has been misleading the public, and its agents were in Cambridge conducting surveillance of the Tsarnaevs on Thursday night, as the MIT officer suggests, where is the accountability for what transpired that night and the next day?

The national security state promises that if we give up our liberty, we will at least enjoy security. In Boston, we got neither. The events that transpired in the Boston metropolitan region on Thursday and Friday April 18-19, 2013 cost hundreds of millions of dollars to the local economy. Our neighborhoods were plunged into a state resembling martial law. A police officer lost his life. The homes of Watertown residents were riddled with bullets—almost exclusively from law enforcement weapons. Many more people could have been killed.

How long will we have to wait for answers?