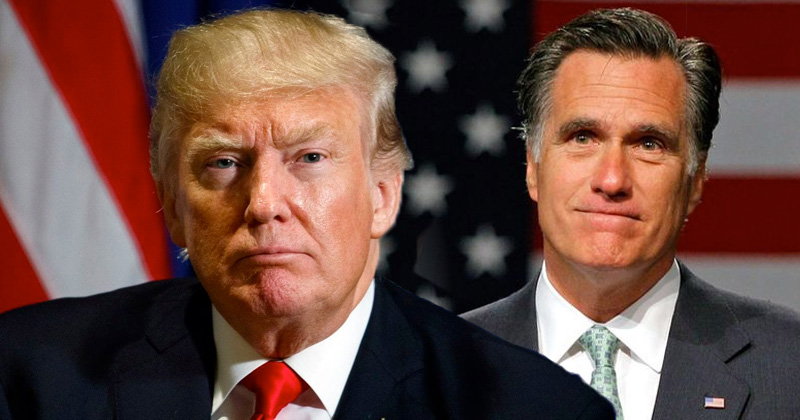 We have seen lots of strange things happen during President Trump’s time in the White House, and Mitt Romney added to that list on Wednesday when he voted to remove Trump from office.

It was the first time in American history that a U.S. Senator has voted to convict a president that belongs to the same political party, and this probably marks the beginning of the end of Romney’s political career.

Amazingly, Romney voted against Trump even though he knew that it would not affect the outcome of the vote.

In fact, Romney knew that he was going to be the only Republican to vote against Trump and he still did it anyway.

Owen Shroyer guest hosts The Alex Jones Show and takes calls from Americans on what they thought of President Trump’s 2020 State Of The Union address.

There have been two other instances in which the U.S. Senate has voted to either convict or acquit a sitting president.  In 1868, President Andrew Johnson would have been convicted if even a single member of his own party had voted against him.  The following comes from the Washington Post…

In 1868, Johnson, a Democrat, faced 11 articles of impeachment from a Republican-controlled House. The Senate considered those articles, ultimately deciding that all but eight were “objectionable.” A vote was held on three, all centered on Johnson’s having violated the Tenure of Office Act that Congress passed to try to constrain his behavior in office.

Bill Clinton was in danger of being removed from office in 1999, but every single Democrat and several Republicans in the Senate stood with him…

In 1999, Clinton, a Democrat, faced two articles of impeachment of four originally introduced in the House. On a charge of perjury, 45 Republicans voted to convict Clinton while 10 Republicans and 45 Democrats voted to acquit. On the other article, focused on obstruction of justice, five Republicans switched from not guilty to guilty. It didn’t matter, though; Republicans were still well shy of the 67 votes needed to remove him from office.

Most experts were anticipating that every single Republican would side with Trump for this vote, and so Romney’s decision was a huge surprise.

In an emotional speech on the Senate floor, Romney explained that he had to vote against Trump because his “oath before God demanded it”…

“I am aware that there are people in my party and in my state who will strenuously disapprove of my decision, and in some quarters, I will be vehemently denounced. I am sure to hear abuse from the President and his supporters. Does anyone seriously believe I would consent to these consequences other than from an inescapable conviction that my oath before God demanded it of me?”

If you have not seen it yet, you can view his full speech right here.

Needless to say, the reaction from Republicans all across the nation was swift and severe.  During a conversation with reporters, Romney said that he was prepared to “accept whatever consequence is sent my way”…

“I will accept whatever consequence is sent my way and recognize that’s part of the job. People don’t expect me to be a shrinking violet,” he said. “I’m feeling the weight of the responsibility for the vote I’ve taken and know that it will have impact on me and my family for a long, long time to come.”

But will there actually be any consequences?

Immediately following the vote, Donald Trump Jr. suggested that Romney should be expelled from the Republican Party…

“Mitt Romney is forever bitter that he will never be POTUS,” tweeted Donald Trump Jr. about the Utah senator’s decision. “He was too weak to beat the Democrats then so he’s joining them now. He’s now officially a member of the resistance & should be expelled from the @GOP.” The Republican National Committee blasted out a press release to reporters with the subject line: “Mitt Romney turns his back on Utah.”

Of course nobody is going to actually try to force him out of the Republican Party.  The only way that he would leave is if he does it willingly.

And at this point Romney has nearly five years left in his Senate term.  He is not up for re-election again until 2024, and so he has quite a long time before he has to face the voters again.

But could it be possible that he could be recalled?  A lawmaker in Utah has actually introduced a bill that would make it possible, and Romney’s vote has created a surge of interest in that legislation…

As news of Sen. Mitt Romney’s vote to convict President Donald Trump spread, interest in a Utah lawmaker’s bill to allow Utahns to recall an elected U.S. senator began to catch fire at the state Capitol.

Rep. Tim Quinn, R-Heber City, said Wednesday he received more than 100 phone calls and 250 emails in just over an hour that were “100% positive to the bill.”

We shall see what happens, but at this point we are being told that the bill has very little chance of actually passing.

And if it did, it would probably be immediately challenged in court.

So the truth is that Mitt Romney is not going anywhere, and he will continue to be a thorn in President Trump’s side for the foreseeable future.

There were some other “moderate” Republicans in the Senate that almost certainly were thinking of voting against Trump, but in the end the political cost was just too great to make such a move.  Maine Senator Susan Collins is up for re-election in November, and Alaska Senator Lisa Murkowski is up for re-election in 2022, and neither of them was interested in potentially committing political suicide.

But Mitt Romney does not seem too concerned about his political future.

Does he intend to only serve one term in the Senate?

Has he totally given up on the idea of ever running for president again?

Only Mitt Romney can answer those questions, and right now he is not saying very much about his future plans.

But this vote will definitely guarantee him a spot in the history books, and Trump supporters will never forget what he has just done.