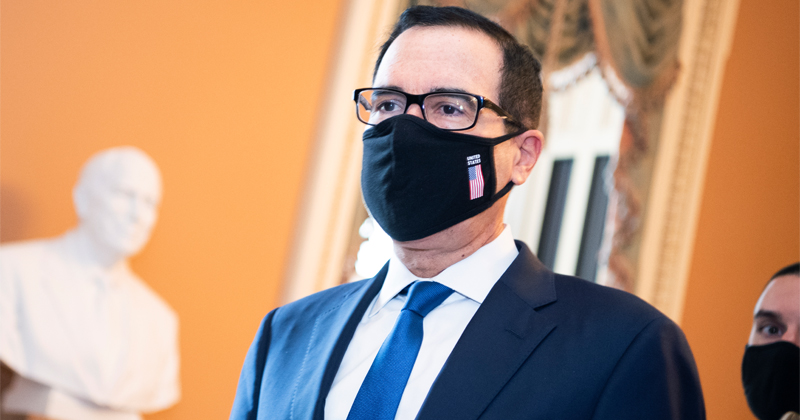 Treasury Secretary Steven Mnuchin says that Republican Senators are looking at extending the enhanced unemployment benefit to December and capping it at 70 percent of a worker’s wages.

The current $600 a week benefit will expire on July 31 and the Republicans, from Trump on down, are now on board for an extension.

But the two sides are still far apart on how to structure the extended benefits. Democrats just want to rubber-stamp a $600-a-week increase and make it indefinite.

Republicans appear to be coalescing around the idea of 70 percent of wages after toying with only offering a $100/week benefit, or substituting a payroll tax cut for the cash payment.

Trump was disappointed that his payroll tax cut idea was rejected out of hand by Democrats.

The Democrats have stated strongly that they won’t approve a Payroll Tax Cut (too bad!). It would be great for workers. The Republicans, therefore, didn’t want to ask for it. Dems, as usual, are hurting the working men and women of our Country!

But Republican plans to release their plan as soon as Thursday appeared to hit a snag as they tried to craft legislative text, further adding to doubts about Congress’ ability to provide immediate relief. Democrats hammered the GOP for a lack of urgency for a second straight day, and rejected the possibility of breaking a coronavirus package into more than one bill if lawmakers cannot reach a broad agreement in July.

“This is a package. We cannot piecemeal this,” House Speaker Nancy Pelosi, D-Calif., told reporters at a news conference with Senate Minority Leader Chuck Schumer, D-N.Y. He added that “we’re not going to take care of one portion of suffering people and leave everyone else hanging.”

Democrats know that if they have separate votes on the extension of unemployment, the $1200 stimulus payment to taxpayers, and aid to state and local governments, compromise is far more likely. They want a similar bill to what they passed in the House — a $3 trillion monstrosity full of non-coronavirus-related aid.

But it’s doubtful the unemployment aid extension will be passed before the deadline if Democrats insist on a package deal. Democrats are using the aid to the unemployed as leverage to force Republicans to panic and make a deal.

Speaking to CNBC after Mnuchin’s comments, House Majority Leader Steny Hoyer, D-Md., said 70% wage replacement is not “the policy we ought to pursue.” He said that “if we’re going to ratchet that down, it ought to be over time.” But he added that “it’s not a dealbreaker.”

The Democrats’ allies in the media are making sure Republicans are feeling the pressure.

The developing GOP bill is only one step in what could be an arduous process to pass a package to boost a health-care system and economy devastated by the pandemic. As Democrats and Republicans try to hash out a range of disagreements — and Republicans try to come to a consensus even among themselves — millions of Americans wait to see whether they will have enough money to pay for food and housing.

The coronavirus aid packages so far have been, simply put, awful legislating. The packages have been poorly structured without much thought going into the consequences. They’ve been too big, too broad, too hasty, and with too much opportunity for error, graft, and waste.

Even if you think something huge has to be done by the government, it’s hard to argue that what Congress has produced so far is the best they can do. Having votes on several aspects of the aid package would help. But Pelosi and the Democrats fear that by the time that happens, the crisis will have eased and it will be harder to spend the trillions of dollars they want to spend.

Pass the unemployment extension now and think before you legislate the rest.