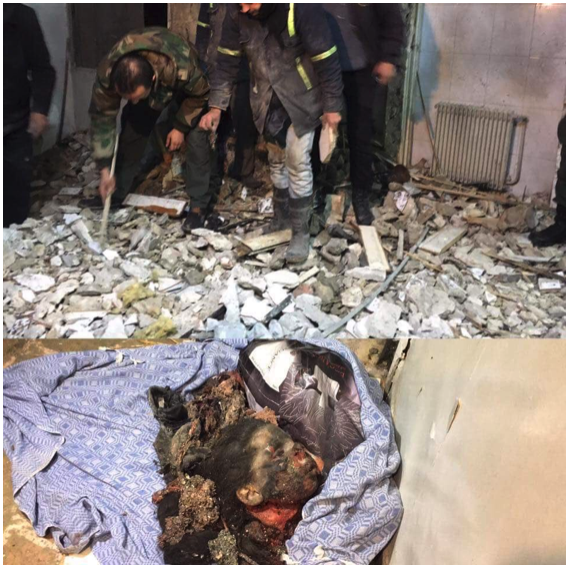 A seven-year-old girl was sent to conduct a suicide bombing targeting a police station in the Syrian capital Damascus.

The girl detonated the bomb at the entrance of Al-Midan police station killing herself in the process while injuring one officer.

Photographs and videos have emerged of the little girls corpse and the destruction of the police station.

The damage is cleaned up after the bombing – WARNING, graphic content:

The little girl entered the police department and claimed that she was lost, according to Russia Today’s Syria correspondent Lizzie Phelan.

Witnesses say she then asked to go to the bathroom before detonating her explosive device.

The chief of the police station, Brig. Gen. Basman Zeidan, said that the bombing caused minor injuries to one policeman and material damage to the second floor’s offices and bathroom.

It is possible that the girl was indoctrinated by one of the various Obama-backed terrorists groups in Syria; however, there are reports from Syrian news station Al Ekhbariya which state that the girl was coerced into committing the deed and that the explosive was detonated remotely.

In June this year Islamic State terrorists targeted a shrine in southern Damascus, killing and injuring dozens of Palestinians.

This is the first time a child was exploited as a suicide bomber in Syria.

However, terrorist groups in Afghanistan and the African terrorist group Boko Haram are said to use young girls as suicide bombers in spite of its direct contradiction to Islamic teachings.

Foreign fighters have flooded into Syria since the insurgency began in 2012.

Earlier this week, fake news about massacres in Aleppo dominated mainstream media headlines as the Syrian army and its allies declared victory over al-Qaeda terrorists.