Imperium in imperio will govern your internet connection

“Competition is a sin,” said the robber baron John D. Rockefeller. His maxim, a rule of conduct for large corporations for well over a hundred years, will soon govern how you receive your internet signal and how much you pay for it. 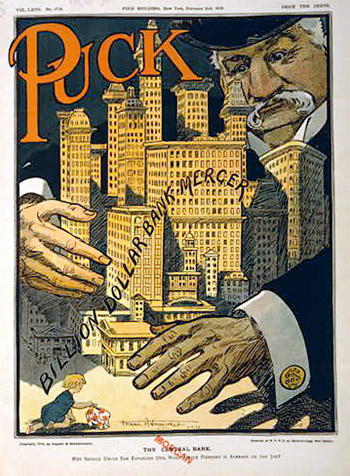 Earlier today, Comcast, the largest mass media and communications transnational corporation in the world, announced it will absorb Time Warner, the world’s second largest media and entertainment conglomerate. The “friendly” merger will “combine the country’s top two cable providers into a colossus that could reshape the U.S. pay TV and broadband industry if it clears regulatory hurdles,” reports Reuters. Hurdles, it should be noted, easily swept away by the real owners of the FCC and the federal government – leviathan-sized international corporations and the global banking cartel.

Despite this fact, we can expect a show. “A deal may face a fierce battle in Washington as you are merging the two largest cable operators,” an analyst told Reuters. It will be another dog and pony show designed to convince the American people they actually live in a democracy where the government pretends it will protect them from predatory monopolies and other highly organized scams and rip-offs. It is well-known in the industry that Comcast has a “wealth of connections” in Washington. In short, it basically owns the FCC.

The Los Angeles Times posted an op-ed Wednesday on the merger. “Say goodbye to the public interest,” it headlines. The liberal newspaper predictably leans on the FCC and states the lumbering government regulatory commission “has all the authority it needs to protect net neutrality.” The prospect of handpicked political apparatchiks deciding the fate of the internet without bias is on par with a government sanctioned monopoly doing basically the same thing. All we basically need to know is that the current chairman of the FCC is Thomas Wheeler, a former lobbyist for the cable and wireless industry.

Prior to a creeping corporate takeover beginning in 1819 when the courts first tested the waters on the contentious subject of corporate personhood, the founders insisted charters be issued for business incorporation. “The Founders did not confuse Boston’s Sons of Liberty with the British East India Company,” Brian Murphy, a history professor at Baruch College in New York, told the Harvard Business Review in 2010. The first generation of Americans “did their best to make sure that those institutions were subordinate to elected officials and representative government. They saw corporations as corrupting influences on both the economy at large and on government — that’s why they described the East India Company as imperium in imperio, a sort of ‘state within a state.’ This wasn’t an outcome they were looking to replicate.”

“With regard to monopolies they are justly classed among the greatest nusances in Government,” James Madison wrote to Thomas Jefferson in 1788, a little more than a century before the Supreme Court ruled in a case involving a railroad that corporations have the same rights as flesh and blood humans.

“In an already uncompetitive market with high prices that keep going up and up, a merger of the two biggest cable companies should be unthinkable,” Craig Aaron of Free Press lamented on Wednesday, prior to the merger. “This deal would be a disaster for consumers and must be stopped.”