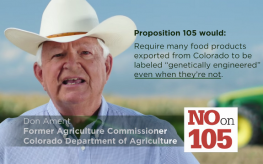 This coming November 4th, Colorado residents will have the chance to vote on Prop. 105 to label GMOs, and Monsanto isn’t wasting anytime trying to defeat the growing tide of opposition to their non-labeling campaigns.

The NO on 105 committee has raised almost $10 million since Sept. 24, with Pepsi Co. and Kraft Foods also giving more than $1 million each. This group has begun running TV ads against the initiative this week.

In the attempt to discredit those who want to know exactly what’s in their foods, Monsanto is running campaigns saying that GMO labeling will cause a rise in food prices, but in the 64 countries that have required labeling, there hasn’t been a spike at all. This flies in the face of the claims made by Monsanto since the agricultural pricing history of so many places is a far better determinate of future events regarding GMOs than their loose propaganda based on speculation.

“This badly written proposal would mandate misleading and inaccurate food labels for Colorado consumers, unfairly hurt our state’s family farmers and small businesses, and increase grocery costs for Colorado families by hundreds of dollars per year.”

This is also false, since many manufacturers already label many foods with misleading claims about their products – like Pepsi-Co labeling Vitamin Water ‘all natural,’ just one of the companies subject to lawsuits over false advertising. What’s more, many farmers have been hurt much worse by biotech companies pushing GMOs – a lawsuit by farmers in three different states against Syngenta for selling a strain of GMO corn that is now being refused by China and pushing domestic corn prices down is a specific example.

In ridiculous diatribes against this GMO labeling proposition, it is being said that:

“Sadly, fear, ignorance and a lazy media have helped to create a problem that makes measures like Prop 105 attractive to consumers.”

It’s odd that a simple label scares biotech so much. We already label food if it contains sugar, MSG, and a number of other unhealthy carcinogens, so why can’t they also label products containing GMOs that have been linked to so many negative health issues?

Another lie is reiterated, too. I’ve heard it so many times now, it makes me ill.

“No reputable study, university, government agency or researcher has ever found the process nor the products to be any more or less safe than any food. Ever.”

This is an outright deceit.

In GMO Myths and Truths, the second edition outlines thousands of peer-reviewed, double-blind tests showing mountains of questionable or disastrous effects of GMO seed and the herbicides used to grow them.

Don’t listen to the hyperbolic statements made by GMO supporters. There is more than enough evidence to prove that GMOs are highly questionable in the least, and outright dangerous in the most positive scenarios. Monsanto may have spent millions to defeat Prop 105, but smart consumers know better.