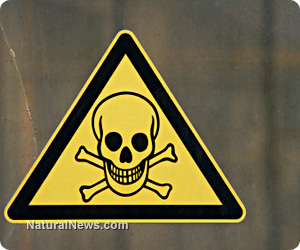 Images are surfacing across the internet that illustrate the true dangers associated with genetically modified (GM) seeds, as admitted by the seeds’ manufacturers. The Food Warrior Network recently posted a photo of a seed package distributed by Monsanto India Limited, for instance, that warns users not to consume the seeds or use them as food, oil or animal feed, because they are poisonous.

This shocking photo is sparking controversy among many health advocates, particularly as the biotechnology industry ramps up the propaganda machine to reassure the public that GMOs are safe and no different from natural organisms. On the contrary, GM seeds are admittedly dangerous and not safe for human consumption, which means the widespread industry claim that they are substantially identical to natural seeds is wholly false.

“Caution: Seeds treated with poison,” reads the package warning accompanying the seeds. “Do not use for food, feed or oil purpose.”

You can view the telling image here:
http://www.facebook.com.

Many commercial seeds treated with health-destroying poisons
As it turns out, all sorts of commercial seeds, including some non-GM conventional seeds, bear similar toxicity warnings that the average consumer will never see. A seed treatment known as Axcess, produced by chemical giant BASF, comes with a warning that clearly prohibits using treated seeds and even plant greens from treated seeds as any type of food, either for humans or animals.

This BASF warning label can be viewed here:
http://www.agproducts.basf.us.

As you will notice, this same warning label contains restrictions on allowing animals to graze fields growing Axcess-treated crops. Wheat, barley, oats, rye, triticale, sorghum and millet crops treated with Axcess are so dangerous that they must be quarantined from animal access for at least 45 days after planting.

GMOs admittedly a threat to the environment, endangered species

If the general public had the chance to read these and similar warnings on package inserts for commercial seeds, it might cause more people to think twice about consuming all these transgenic derivatives that the chemical companies insist are safe. GMO labeling also suddenly becomes a whole lot more prudent in light of these revelations.

Even worse is the fact that using these chemical-treated seeds threatens both the environment and native species, including endangered species protected by federal statues. A package insert for seed treated with SIGNET 480 FS, for instance, which is manufactured by a company called Nufarm, explains that the treatment is harmful to fish, birds, endangered species and the environment.

“This chemical is toxic to fish, aquatic invertebrates, birds, oysters and shrimp,” reads the insert, referencing a chemical known as “Thiram: Tetramethylthiuram Disulfide.” “This product may have effects on federally listed threatened or endangered species or their critical habitat in some [U.S.] counties,” it adds.

So everything that real food advocates have been saying for years about the toxicity of GMOs and chemical-treated conventional seed crops appears to be true, based on these warnings. Humans, animals and the environment are all threatened by the use of GM seed technologies that involve deliberately tampering with seed structures, which in this case involves coating and treating them with harmful chemicals that destroy everything with which they come into contact.