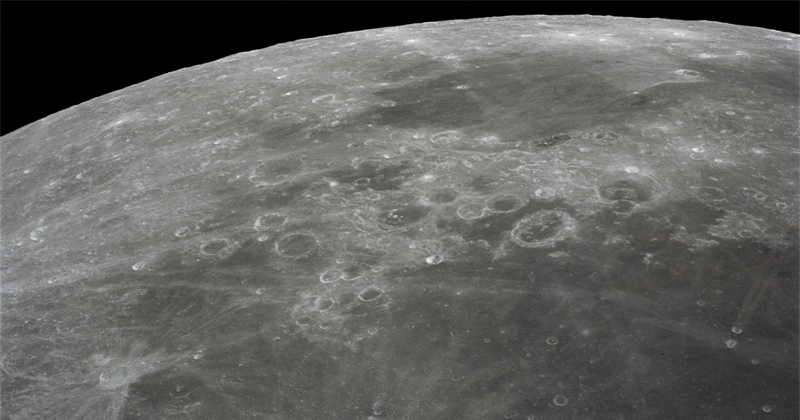 What started out as a hunt for ice lurking in polar lunar craters turned into an unexpected finding that could help clear some muddy history about the Moon’s formation.

Team members of the Miniature Radio Frequency (Mini-RF) instrument on NASA’s Lunar Reconnaissance Orbiter (LRO) spacecraft found new evidence that the Moon’s subsurface might be richer in metals, like iron and titanium, than researchers thought. That finding, published July 1 in Earth and Planetary Science Letters, could aid in drawing a clearer connection between Earth and the Moon.

“The LRO mission and its radar instrument continue to surprise us with new insights about the origins and complexity of our nearest neighbor,” said Wes Patterson, Mini-RF principal investigator from the Johns Hopkins Applied Physics Laboratory (APL) in Laurel, Maryland, and a study coauthor.

Substantial evidence points to the Moon as the product of a collision between a Mars-sized protoplanet and young Earth, forming from the gravitational collapse of the remaining cloud of debris. Consequently, the Moon’s bulk chemical composition closely resembles that of Earth.

Look in detail at the Moon’s chemical composition, however, and that story turns murky. For example, in the bright plains of the Moon’s surface, called the lunar highlands, rocks contain smaller amounts of metal-bearing minerals relative to Earth. That finding might be explained if Earth had fully differentiated into a core, mantle and crust before the impact, leaving the Moon largely metal-poor. But turn to the Moon’s maria — the large, darker plains — and the metal abundance becomes richer than that of many rocks on Earth.

This discrepancy has puzzled scientists, leading to numerous questions and hypotheses regarding how much the impacting protoplanet may have contributed to the differences. The Mini-RF team found a curious pattern that could lead to an answer.

Using Mini-RF, the researchers sought to measure an electrical property within lunar soil piled on crater floors in the Moon’s northern hemisphere. This electrical property is known as the dielectric constant, a number that compares the relative abilities of a material and the vacuum of space to transmit electric fields, and could help locate ice lurking in the crater shadows. The team, however, noticed this property increasing with crater size.

“It was a surprising relationship that we had no reason to believe would exist,” said Essam Heggy, coinvestigator of the Mini-RF experiments from the University of Southern California in Los Angeles and lead author of the published paper.

Discovery of this pattern opened a door to a new possibility. Because meteors that form larger craters also dig deeper into the Moon’s subsurface, the team reasoned that the increasing dielectric constant of the dust in larger craters could be the result of meteors excavating iron and titanium oxides that lie below the surface. Dielectric properties are directly linked to the concentration of these metal minerals.

If their hypothesis were true, it would mean only the first few hundred meters of the Moon’s surface is scant in iron and titanium oxides, but below the surface, there’s a steady increase to a rich and unexpected bonanza.

Comparing crater floor radar images from Mini-RF with metal oxide maps from the LRO Wide-Angle Camera, Japan’s Kaguya mission and NASA’s Lunar Prospector spacecraft, the team found exactly what it had suspected. The larger craters, with their increased dielectric material, were also richer in metals, suggesting that more iron and titanium oxides had been excavated from the depths of 0.3 to 1 mile (0.5 to 2 kilometers) than from the upper 0.1 to 0.3 miles (0.2 to 0.5 kilometers) of the lunar subsurface.

“This exciting result from Mini-RF shows that even after 11 years in operation at the Moon, we are still making new discoveries about the ancient history of our nearest neighbor,” said Noah Petro, the LRO project scientist at NASA’s Goddard Space Flight Center in Greenbelt, Maryland. “The MINI-RF data is incredibly valuable for telling us about the properties of the lunar surface, but we use that data to infer what was happening over 4.5 billion years ago!”

The team emphasizes that the new study can’t directly answer the outstanding questions about the Moon’s formation, but it does reduce the uncertainty in the distribution of iron and titanium oxides in the lunar subsurface and provide critical evidence needed to better understand the Moon’s formation and its connection to Earth.

“It really raises the question of what this means for our previous formation hypotheses,” Heggy said.

Anxious to uncover more, the researchers have already started examining crater floors in the Moon’s southern hemisphere to see if the same trends exist there.