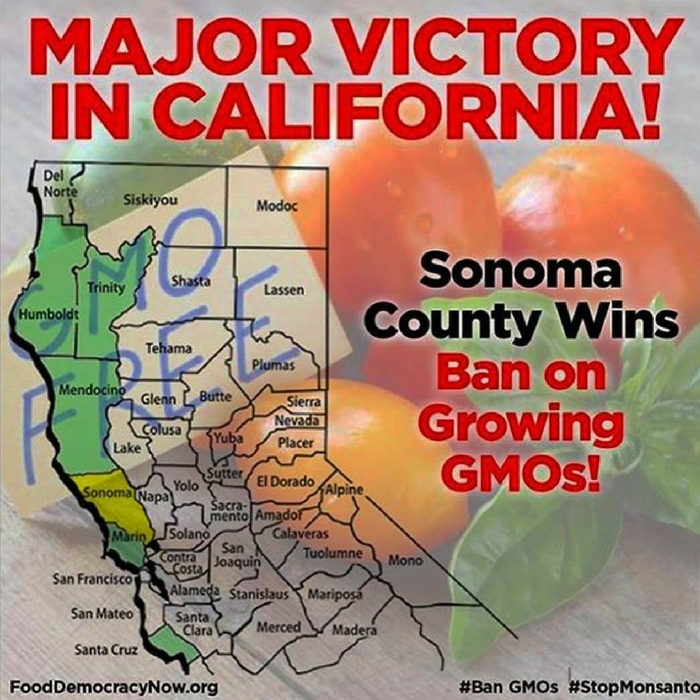 It appears that voters in Sonoma County, California, have banned genetically modified organisms (GMOs) by a margin of 56-44%, unofficial results show. In 2005, Sonoma County voters shot down a similar measure by 5%. The ban reflects changing attitudes about the biotech industry, and its impact on the environment and human health. [1]

According to Karen Hudson, head of the campaign for the measure, U.S. law mandates that if 1% of a farmer’s crop is contaminated by genetically engineered (GE) pollen, it becomes illegal for that farmer to use the seeds the following year. She said:

“All of that seed belongs to the corporation that owns the patent on those seeds.”

Hudson is concerned about the increased use of herbicides in GMO plants, particularly Roundup-ready crops. Said Hudson:

“Spraying a crop with the same herbicide in a field over and over for several years depletes the soil of its nutrients. And it also creates weeds that are resistant to that particular herbicide.”

If the measure, which was on the ballot as “Measure M,” officially passes, farmers will not be permitted to plant any GMO seeds or GMO crops in unincorporated areas, including most vineyards, dairies, and farms in the county.

In April, the GMO awareness group Moms Across America reported that it had found glyphosate, the main ingredient in Monsanto’s Roundup herbicide, in 100% of California wines the group tested, including some labeled “organic.”

Under Measure M, there will be a transition period to allow growers to continue cultivating existing GMO crops until the plants mature. Farmers who possess GMO seeds would have to plant them in the growing season after the ordinance goes into effect. After that growing season, the GMO seeds would have to be destroyed or removed from the United States.

The ordinance would take effect immediately following the finalization of the voting results, which is expected early next month.

Sonoma County connects Marin County to Mendocino, Humboldt, and Trinity, so the ban would create a 13,734-square-mile zone where GM plants cannot be grown. This would be the largest such GM-free area in the U.S. [2]

Measure M does have some limits, however. It would not cover the use of medicinal treatments involving GE vaccines or medications for humans or animals. It also would not stop GMO research at secure laboratories in Sonoma County. [3]