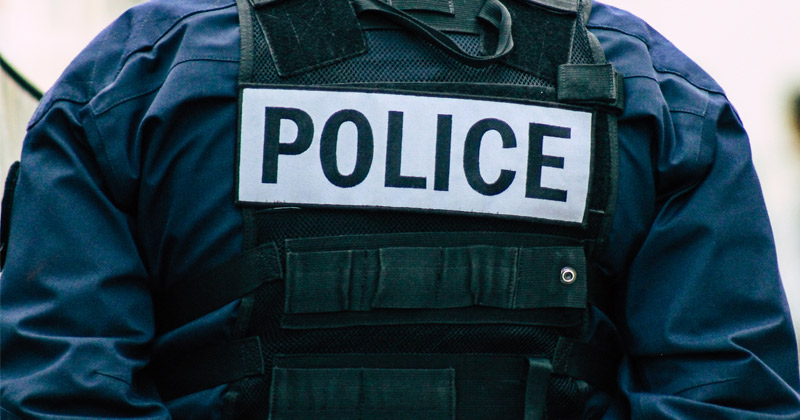 One of the most perplexing displays of cognitive dissonance this year is the strong support for a large state can be found within the various protest movements that are targeting the issue of law enforcement misconduct.

Logically, groups opposing police misconduct should also be strong supporters of the libertarian ideology. However, this does not appear to be the case. This movement, oddly enough, has quite a bit of overlap with support for gun control, the welfare state, and more regulation. The central organization, Black Lives Matters, is a fully Marxist entity.

Socialism, Marxism, communism, and other ideologies revolve around the strong or total domination of the state in everyday life. The state, as defined by Murray Rothbard in Anatomy of the State, is an “organization in society which attempts to maintain a monopoly of the use of force and violence in a given territorial area.” The way the state maintains authority within its jurisdiction is with the application of laws.

The Nature of a Law

A law is defined as “a rule of conduct or action prescribed…or formally recognized as binding or enforced by a controlling authority.” It is a set of rules that either obligate or forbid action with a penalty for failure to comply. While it may sound good to have a set of rules that individuals must adhere to and penalties to incentivize compliance, the nature of those penalties is where we run into issues.

While laws may have formally designated penalties for noncompliance, those penalties can be best viewed as a minimum sentence. The maximum penalty for failure to comply with any given law is execution of the perpetrator. While this sounds like hyperbole, it’s important to understand why this is the case and how law enforcement must resort to this.

Take a case of counterfeit money. The sentencing guidelines for counterfeiting money are a sixteen-month minimum and in some states a fine with a maximum prison sentence of twenty years. However, what if the accused refuses to show up in court? The court could then find the perpetrator guilty in absentia and apply the sentence and fine. Should the person refuse to part with their resources or report to prison, the court would then order an enforcement agent to collect the accused. This is also what could happen should the accused refuse to show up for court itself. And should the accused resist this arrest? This is where grievous bodily harm up to and including death can occur.

If you think this is hyperbole, this is exactly the situation that led to the death of George Floyd; a twenty-dollar counterfeit bill and refusal to be taken into law enforcement custody.

The reason state agents resort to killing an accused for refusal to comply is that, despite the verbal claims to the contrary by the state itself, there is no other way to ensure compliance with laws. If the general public knows that the worst the state will ever do is send easily ignored bills in the mail for fines, then laws would never be followed and the state would collapse. Because the state is an institution of violence, all laws must be backed with violence. The state may be careful to conceal this reality, but the ultimate refusal of compliance is always a summary execution.

This can be demonstrated by the increasing number of death by legal intervention within the baseline white ethnicity in the United States in the aftermath of the war on drugs, particularly after the 1984 Sentencing Reform Act. Per a Harvard study, the rate of killings via legal intervention of whites in 1985, the year after the US government decided to get tough on crime, stood at 0.28 per 100,000. By 2005 this number had risen to 0.37 per 100,000, an increase of 32 percent.

The reason I used whites as the baseline is due to the high volatility in the black legal intervention deaths. The underlying increase in the white death rate could indicate that the improvement in the black victimization rate should be even steeper than is reported now, but the overall impact is difficult to identify with other factors overwhelming the effects.

Further evidence that more law means more violence can be found in strong statist regimes. Enforcement killings in regimes like Venezuela are significantly worse and large-scale executions have been used to ensure legal compliance in societies like Maoist China and the Soviet Union. A society that believes it can solve all of its problems with the imposition of law will inevitably find itself engaging in large-scale killings to enforce it. The more aggressive the attempt at transforming society through legal imposition, the more aggressive the killing will be.

This is where the cognitive dissonance with the defund police movements comes into play. The people who support eliminating police violence also regularly support the passage of new mandates, redistribution schemes, and regulatory impositions. Without police, how do they think all these new laws and rules will be enforced? If taxation were a voluntary affair, few individuals would turn a substantial portion of their annual earnings over to the state for redistribution. If gun control were a suggestion, few people would make any effort to submit to the FFL (Federal Firearms License) sales regulations.

By advocating for more laws, rules, and taxes, these people are effectively advocating for an increase in police violence. Abolishing the entity called “police” won’t solve the issue, since the state will inevitably have to form a new entity that does all the same things and has all the same powers. Outlets like Vox can advocate for the creation of mobile response units and community mediators all they want; these entities are, from the viewpoint of the state, toothless without any means to initiate violence to ensure compliance with rules. Community mediators will either find themselves armed or calling on some newly created entity that looks and acts a lot like current police but is called something different to deal with a belligerent individual who refuses to follow the mandate. As anyone with a glove box filled with unpaid parking tickets can tell you, it’s easy to ignore a piece of paper with a fine on it. The state is going to inevitably need an armed, violent agency to handle noncompliant individuals.

The only way to ensure an end to police brutality is not concocting new entities with different names or, worse, focusing on the ethnic element of it, as all that does is try and argue that police violence is fine so long as it’s dished out equally along ethnic lines. The only way is to abolish the state. Without a state, there is no state law. Without state law, there isn’t a need for enforcement by an entity that operates with the language of violence. Without violent enforcement, there isn’t anyone getting killed for noncompliance.

Private structures have little incentive to kill noncompliant actors, and they are able to create stronger enforcement structures than state actors can. Social ostracizing, ejection from business groups, or a ban from a shop would have an equally strong impact compared to the threat of violence. Further, private security agencies that quickly utilize violence would find themselves undesired by customers and lose favor, especially if these agencies create the impression that they are against a particular group of potential customers.

As nice as it would be to believe that police can exist solely as a protection service, this isn’t the case. There’s a reason they’re called law enforcement and not protective services. The US Supreme Court has already definitively told us that our police agencies have no obligation to protect anyone. Their only priority is enforcing the laws, and as those laws expand, the chances we’ll find ourselves interacting unfavorably with an enforcer will increase.