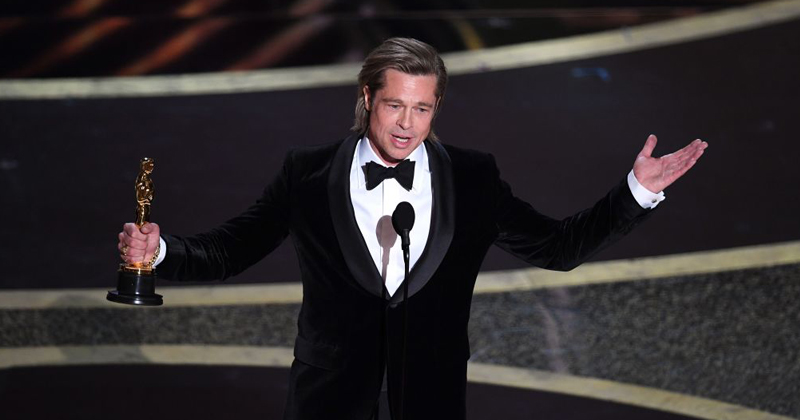 The 92nd annual Oscars award ceremony took place Sunday night, and there was no shortage of disconnected “woke” Hollywood elites lecturing condescendingly to the plebs.

Actor and recent Golden Globes host Ricky Gervais summed up the night in a tweet Monday, claiming he warned the “most famous people in the world” not to lecture “everyday, hard working people.”

I have nothing against the most famous people in the world using their privileged, global platform to tell the world what they believe. I even agree with most of it. I just tried to warn them that when they lecture everyday, hard working people, it has the opposite effect. Peace.

Of course, the out-of-touch limousine liberals – many of whom flew in on private jets while at the same time claiming to care about climate change – missed Gervais’ memo.

For instance, the winner of the Oscar for best documentary feature, Julia Reichert, used her acceptance speech for “American Factory” to promote one of the goals outlined in “The Communist Manifesto.”

“Our film is from Ohio and China, but it really could be from anywhere that people put on a uniform, punch a clock, trying to make a better life,” said Reichert. “We believe things will get better when workers of the world unite.”

Julia Reichert of "American Factory": "Working people have it harder and harder these days—and we believe that things will get better when workers of the world unite." https://t.co/8kz7m5vtnF #Oscars pic.twitter.com/tVGnWP7HBi

The phrase “workers of the world unite” is taken directly from Karl Marx and Frederick Engels’ seminal book, “The Communist Manifesto,” which advocates the abolition of private property and proletariat uprising against the “bourgeoisie.”

As noted by The Daily Caller, Reichart’s film “is the first picture to come from Higher Ground Productions, the production company owned by former first couple Barack and Michelle Obama.”

Another cringe-worthy moment came when “Once Upon a Time in Hollywood” actor Brad Pitt used his acceptance speech to whine about the Democrats’ failed impeachment coup attempt against U.S. President Donald Trump.

“They told me I only have 45 seconds up here, which is 45 seconds more than the Senate gave John Bolton this week,” Pitt said in the introduction of his speech. “I’m thinking maybe Quentin does a movie about it, in the end, the adults do the right thing.”

The winner of the Best Actor category, Joaquin Phoenix, used his time on stage to lecture “entitled” dairy consuming Americans on their “egocentric world view.”

Joaquin Phoenix is really out here at the #Oscars lecturing us about how we oppress cows for their milk pic.twitter.com/LmOmqVMXME

“I’ve been thinking a lot about some of the distressing issues that we are facing collectively, and I think at times we feel or are made to feel that we champion different causes,” the Joker actor stated. “But for me, I see commonality. I think whether we’re talking about gender inequality or racism or queer rights or indigenous rights or animal rights, we’re talking about the fight against injustice.”

“We’re talking about the fight against the belief that one nation, one people, one race, one gender, or one species has the right to dominate, control, and use and exploit another with impunity,” Phoenix added. “I think that we’ve become very disconnected from the natural world and many of us, what we’re guilty of, is an egocentric world view, the belief that we’re the center of the universe.”

“We go into the natural world and we plunder it for its resources,” the lifelong vegan stated. “We feel entitled to artificially inseminate a cow and when she gives birth, we steal her baby. Even though her cries of anguish are unmistakable. And then we take her milk that’s intended for her calf and we put it in our coffee and our cereal. And I think we fear the idea of personal change because we think that we have to sacrifice something to give something up but human beings, at our best, are so inventive and creative and ingenious, and I think that when we use love and compassion as our guiding principles, we can create, develop, and implement systems of change that are beneficial to all sentient beings and to the environment.”

Actress Natalie Portman used her wardrobe Sunday night to preach about gender inequality in Hollywood, wearing a dress embroidered with the names of female directors, none of whom were nominated for the Best Director category.

Natalie Portman embroidered her Dior cape with all of the female directors who weren't nominated for #Oscars. Check out her explanation here. pic.twitter.com/kyyo2wVMZf

Sigourney Weaver: “All women are superheroes.”

“We want to stand here together and say that all women are superheroes,” Weaver said, with Gadot and Larson agreeing.

The first rule of @brielarson, Sigourney Weaver and @GalGadot's fight club is… everybody will talk about it. #Oscars pic.twitter.com/Cxdjb8llb3

Presenting musical performer Indina Menzel, who was performing a song from “Frozen 2,” comedian Josh Gad used his introduction to bash people who question the notion of manmade climate change, joking they call the movie “Not Frozen 2.”

Josh Gad: Frozen 2, or as climate change deniers call it, Not Frozen 2… #Oscarspic.twitter.com/pIkH4kl9vn

“Barbarella” actress Jane Fonda, 82, also wore one of her old dresses on the red carpet to raise awareness for climate change.

At the Oscars on Sunday evening, Fonda presented the award for Best Picture in an Elie Saab gown that she wore in 2014 to the Cannes Film Festival — a decision she made after being inspired by teen climate change activist Greta Thunberg.

What jokes would Gervais have told?

During Sunday night’s award ceremony, Golden Globes host Ricky Gervais, who took Hollywood to task last month with a blistering monologue, posted critical tweets and also revealed what his opening jokes would have been had he hosted the Oscars.

America!
Binge-watch #AfterLife on @Netflix tonight. It’s about a man who realises that humanity is a disgusting, narcissistic plague, and so becomes angry & depressed and loses the will to live. Or watch The Oscars instead and actually experience those feelings first hand. pic.twitter.com/3mUo4bOpte

“It’s great to see such diversity in the room tonight. Rich sex pests of all shapes and sizes” https://t.co/fsFbdDkv6u

“I can’t wait to hear all your inspirational speeches about equality, and it’s great that the 3 hours you’re here tonight is the only time your badly paid migrant house staff will get some time off to sleep this week” https://t.co/fsFbdDkv6u

At the Golden Globes, actress Michelle Williams took Ricky Gervais’ advice and thanked her god for success that she thinks came from the freedom to kill her kids.