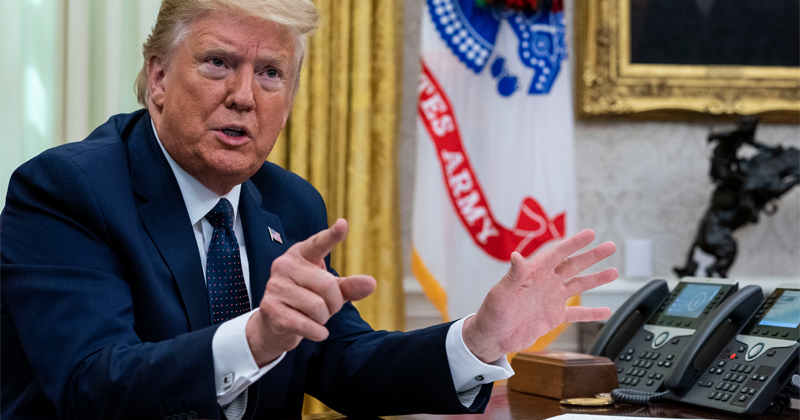 President Trump slammed governors in Democrat-run states as “weak,” after nationwide protests over the death of George Floyd turned into violent riots.

“Most of you are weak,” Trump told the nation’s governors during a Monday morning phone call – while Attorney General Bill Barr, who was on the call, advised them to “dominate” the situation and “take back your streets,” according to AP, citing multiple sources familiar with the call.

The president told the governors they were making themselves “look like fools” for not calling up more of the National Guard as a show for force on city streets.

Attorney General Bill Barr, who was also on the call, told governors that a joint terrorist task force would be used to track the agitators and urged local officials to “dominate” the streets and control, not react to crowds, and urged them to “go after troublemakers.”

Trump’s comments come as images of smouldering cities followed a night of escalating violence, looting and clashes with the police – for which he has come under increasing pressure from both sides to deliver a formal address. So far, Trump has responded with a flurry of tweets over the weekend blaming the demonstrators, the press, and slamming former VP Joe Biden and his staff for donating money to bail out rioters in Minneapolis.

“These were the people that trashed Seattle years ago. Who’s paying for these people. I was appalled that 13 of Joe Biden’s staff were donating money to bail people out in Minneapolis. They should have stayed in jail until this is over (and beyond).” @newtgingrich @foxandfriends


The Lamestream Media is doing everything within their power to foment hatred and anarchy. As long as everybody understands what they are doing, that they are FAKE NEWS and truly bad people with a sick agenda, we can easily work through them to GREATNESS!


According to AP, “Trump’s advisers discussed the prospect of an Oval Office address in an attempt to ease tensions. The notion was quickly scrapped for lack of policy proposals and the president’s own seeming disinterest in delivering a message of unity.”

The president also urged governors to deploy the National Guard, which he commended for keeping the peace in Minneapolis Sunday night – suggesting that the same should be done in New York, Los Angeles and Philadelphia.