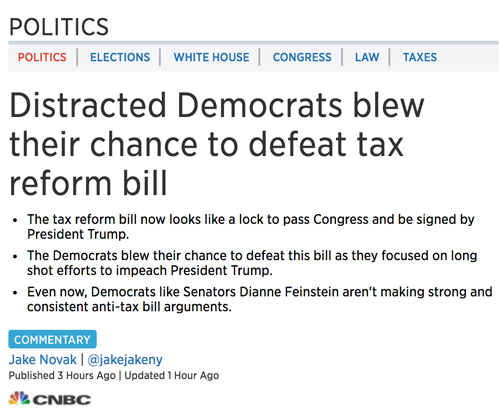 The Democrats have failed at defeating the tax cut bill set to pass Congress this week by instead focusing on impeaching and “resisting” Trump rather than presenting policy ideas for the bill, according to CNBC.

“The Democrats and the left in general have blown their wad,” wrote Jake Novak on Monday.

“They started blowing it on day one with the massive and often violent protests during on[sic] inauguration day. Just a day later they outdid that with a massive “Women’s Day” march that quickly morphed into a resist Trump event.”

But nothing compares to the obsessive attention the left has given to Mueller’s investigation into alleged collusion between Trump and the Russian government, said Novak.

“Even this past weekend, the most passionate rhetoric from the left was all about how there should be riots in the streets if President Trump fires special counsel Robert Mueller.”

“The resist Trump movement is clearly stretched too thin,” he added.

Rep. Dan Donovan (R-NY) also lambasted Democrats over the weekend for not coming to the table to hash out the tax cut bill, noting the bill would “look a lot different” if they had.

“The president is trying to do this because he’s not getting Democratic support,” Donovan said. “There are people, unfortunately, in Washington who want to see our president fail no matter how it affects the people they represent.”

This is evidenced by their desperate attempt to force an impeachment vote last month (which failed spectacularly in a 364-58 vote), and their concerted effort to push a false narrative about Russia collusion to get Trump out of office before he drains the swamp and rolls out his ‘America First’ agenda.