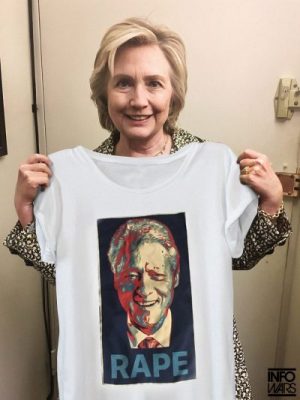 The mainstream liberal media is finally beginning to condemn former President Bill Clinton’s past sexual allegations in light of the current climate of sexual harassment being called out in Hollywood and Washington DC, proving once again that Infowars brings you next year’s and even the next decade’s news today.

At least four major liberal outlets, including The New York Times, The Atlantic, Vox, and The Washington Post have all published scathing articles in the last few days about how the time has finally come for Bill Clinton to answer for his predatory behavior.

The political and cultural fallout from the disturbing revelations surrounding Hollywood producer Harvey Weinstein has triggered a domino effect, with more high profile figures like Kevin Spacey, Mark Halperin, and Louis C.K. being outed by their female (and male) colleagues for their perversions in a movement that’s gained attention on Twitter called “#MeToo.”

“In this #MeToo moment, when we’re reassessing decades of male misbehavior and turning open secrets into exposes, we should look clearly at the credible evidence that Juanita Broaddrick told the truth when she accused Clinton of raping her,” wrote Michelle Goldberg of The New York Times on Monday in a piece titled “I Believe Jaunita Broaddrick.”

The Atlantic, a globalist publication, said a “reckoning” is due for Clinton that same day.

“The Democratic Party needs to make its own reckoning of the way it protected Bill Clinton,” wrote Caitlin Flanagan.

“The party needs to come to terms with the fact that it was so enraptured by their brilliant, Big Dog president and his stunning string of progressive accomplishments that it abandoned some of its central principles. The party was on the wrong side of history, and there are consequences for that.”

WaPo went even further in a piece called “This Is All Bill Clinton’s Fault,” suggesting that Hillary Clinton would have been President had it not been for Bill’s sexual misconduct.

“Had the Clintons played their cards differently, our country might have become less coarse, and our infantile impulsiveness less pronounced,” wrote Kathleen Parker.

“It might not have taken 25 years for women to find their voices. More men might have treated their female colleagues with greater respect. Who knows? Hillary Clinton might have become president.”

Vox also chimed in, saying that the “cynical stunt by the Trump campaign” to bring Jaunita Broaddrick into the national conversation during the 2016 presidential race has actually “prompted a reconsideration of Juanita Broaddrick’s allegation that Bill Clinton raped her in 1978.”

“This is an important conversation to have, due to both the serious nature of the charges and their interplay with the commonplace progressive idea that we should “believe women” when they come forward with allegations of sexual assault,” Vox co-founder Matthew Yglesias wrote Wednesday.

Every survivor of sexual assault deserves to be heard, believed, and supported. https://t.co/mkD69RHeBL

Infowars has exhaustively covered the many crimes perpetrated by Bill Clinton for years, having interviewed former girlfriend Dolly Kyle, Bill’s estranged son Danney Williams, and ex-Secret Service agent Dan Bongino about their experiences with the Clintons.

Notably, Infowars has been so adamant to get the word out about Bill Clinton being an alleged rapist that we launched the “Bill Clinton Is A Rapist” campaign that saw dozens of Infowarriors expose Bill on live TV by either yelling “Bill Clinton is a rapist” or sporting the Infowars Bill Clinton “Rape” shirt, which is incidentally still available at the Infowars Store for $19.95.