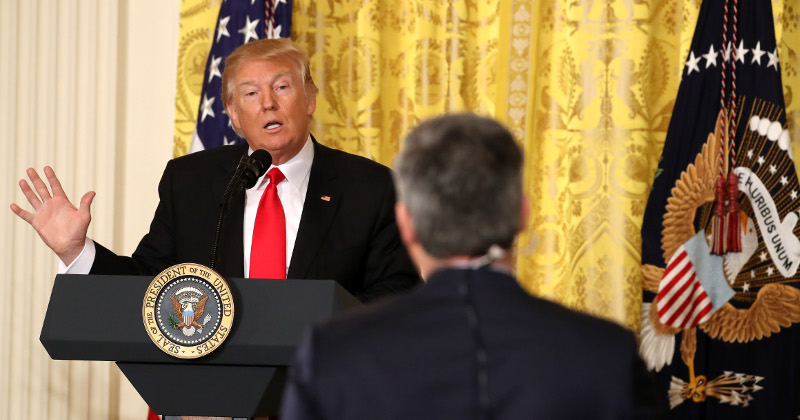 Conservatives are digging through reporters’ social media histories to find “potentially embarrassing” posts that could be used to discredit their employers, MSM has discovered to its horror – only they are allowed to do that!

“A loose network of conservative operatives” is sifting through journalists’ social media histories, looking for inflammatory nuggets that can be used to discredit the organizations they work for, the New York Times warned earlier this week, noting that this band of marauding internet sleuths has already exposed sensitive information about reporters from CNN, the Washington Post, and the Times itself.

Much of it, they claim, “has been professionally harmful to its targets.”

Who are these right-wing information terrorists, and why are they doing such a terrible thing? It’s a “response to reporting or commentary that the White House’s allies consider unfair to [US President Donald] Trump and his team or harmful to his re-election prospects,” of course.

That the New York Times is pearl-clutching about politically-motivated smear campaigns – Washington’s bread and butter since the dawn of time – is ridiculous on its face. But their feigned moral outrage becomes actively insulting when it becomes clear it isn’t the social media-mining smear campaigns the outlet has a problem with – it’s the “conservative” part of it.

Alex Jones exposes the leftist media owned by the Chicoms and their blatant attempt to propagandize the American people into backing a Chinese coup inside America.

The Trump supporters’ campaign is designed to highlight mainstream media’s hypocrisy in constantly calling the president a racist, sexist, homophobe, and other identity-politics mortal sins while being racist themselves, former Trump aide Sam Nunberg – a friend of campaign ringleader Arthur Schwartz – explained.

“Two can play at this game … The media has long targeted Republicans with deep dives into their social media, looking to caricature all conservatives and Trump voters as racists.”

Schwartz, a conservative political consultant, is described as a friend to Donald Trump Jr. and an erstwhile colleague of Steve Bannon. While the White House denies Schwartz’s operation receives government funding, the Times does its best to play up the connection between the muckraker and the Bad Orange Man, declaring that “the campaign is consistent with Mr. Trump’s long-running effort to delegitimize critical reporting and brand the news media as an ‘enemy of the people.’”

Schwartz is portrayed as a mustache-twirling menace, threatening to “expose a few of [the Times’] other bigots” in a tweet after dredging up a handful of racist tweets from politics section editor Tom Wright-Piersanti last week and “known for badgering and threatening reporters and others he believes have wronged the Trumps.”

But the Times turns a blind eye toward similar campaigns by mainstream media allies. CNN’s Oliver Darcy, for example, infamously trawled through a decade of Alex Jones’ tweets in order to produce evidence that he ought to be deplatformed from Twitter. And the Daily Beast’s Will Sommer dug through Google whistleblower Zach Vorhies’ tweets as soon as he went public, finding enough controversial material to scare most media outlets away from interviewing someone whose leaks they had been perfectly happy to report on before they knew who he was.

The #Resistance even has a big-budget smear operation of its own: former Clinton strategist David Brock’s infamous Media Matters, devoted to the same kind of social-media sleuthing (Rudy Giuliani retweeted a QAnon account!) and guilt-by-association smears (a Fox Sports clip was replayed on Infowars!) that the Times finds so odious in Schwartz’s group.

Except Media Matters gets a pass from the Times, which praises the organization for pioneering the public records deep-dive and accuses conservative operatives like Schwartz and Project Veritas’ James O’Keeffe of “twisting” its business model to “undercut the credibility” of the supposedly liberal media.

CNN warned that smear merchants who “threaten and retaliate against reporters as a means of suppression” represent “a clear abandonment of democracy for something very dangerous.” Is this the same CNN who threatened to dox a Reddit user for animating an image showing the CNN logo on the receiving end of a pro-wrestling smackdown?

Apparently such extortion is only bad for democracy if it’s done on behalf of Trump.

And none of the outlets clutching their pearls about Schwartz’s call-out operation seem to understand their part in creating the culture that made such things possible. Wright-Piersanti’s tweets, while racially insensitive, are not the sort of thing that would have warranted a second look 10 years ago, let alone imperiled one’s professional position.

Liberals have only themselves to blame for creating the hyper-PC media bubble in which they ply their trade. None of the apology ballet Wright-Piersanti has performed after Breitbart republished his youthful tweets would have been necessary in a pre-identity politics era – and it wasn’t conservatives who stretched these rhetorical tripwires across every sensitive area of American life in the hope of ensnaring someone who could be pilloried for their insensitivity.

It’s no surprise that the New York Times and its mainstream media peers are not enjoying being on the receiving end of the public-history smear their peers pioneered so long ago.

Perhaps they even regret giving their own “side’s” black-PR artists space to ply their trade, allowing the tactics to fall into enemy hands. But it’s too late to do anything about it now – mainstream journalists have spent the last three years disingenuously attacking Trump and his allies, and rarely for their genuine transgressions (wasn’t he supposed to end some wars, or something?). They’ve made their bed, and now they must lie in it.

When you start a culture war, don’t expect to come out unscathed.

Thirty victims of Jeffrey Epstein testified against him, and the MSM swept it under the rug.